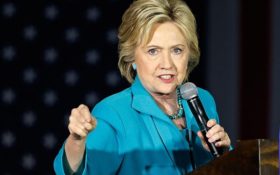 Her history proves that’s not true.

No wonder she never learns from her mistakes — everyone else pays for them!

For example, take the news that two influential Democratic operatives will lose their jobs after being caught on video bragging about instigating violence at Republican presidential candidate Donald Trump rallies and conspiring to commit voter fraud on behalf of the Clinton campaign. Scott Foval told undercover investigators he hires “mentally ill” people to disrupt Trump gatherings and create chaos. Robert Creamer, who is married to Democratic Congresswoman Jan Schakowsky of Illinois, described the tactics he uses to “find my way around the voter registration law for Hispanics” in swing states.

The footage, released by Project Veritas, bears out Trump’s warnings that the presidential election is being rigged.

When the Clintons get embarrassed, somebody is getting the axe – and that somebody is never Hillary.

Both men denied any wrongdoing. But last Monday, Americans United for Change announced it had cut ties with Foval, and a day later Creamer said he, too, was falling on his sword and “stepping back” from the campaign.

It has long been rumored that standing in the way of Clinton is a great way to end up on a missing persons report, but even supporting her might get you terminated in another way.

These two powerful men join a long list of people the former first lady has asked to fall on their sword for her sake, including:

Being a friend of Hillary Clinton’s seems to be a one-way street. How much does Hillary Clinton really care about you if she’s willing to put her friends out of work to save her own skin?

Her wrath extends even to those in the mainstream media that question her. Just ask:

That’s a lot of jobs lost.

But those unemployed Americans are just the tip of the iceberg, should Clinton be elected in two weeks.