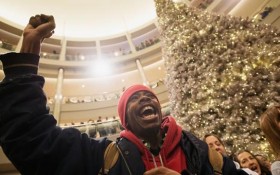 Set to do some last minute Christmas shopping? Not if the Black Lives Matter protesters have their way. The group vowed to disrupt shoppers at Minnesota’s Mall of America tomorrow, even if a judge grants the mall’s request to bar them from doing so.

Miski Noor, one of the organizers, said after a hearing Monday about the mall’s request for a temporary restraining order that the protest would take place Wednesday, no matter what.

“We’re not going to be canceling the protest,” she told reporters after the hearing in Hennepin County District Court. “Us not showing up and us not speaking would be the mall winning.”

The mall wants to avoid the type of disruption caused by a Christmas-time demonstration last year, when thousands of protesters angry over the absence of charges involving police killings of unarmed black men in Ferguson, Missouri, and New York City forced the temporary closure of mall stores.

Judge Karen Janisch indicated that she could rule on the restraining order request within hours, giving police the power to detain anyone seen associated with the movement on mall property.

Beyond barring the protest, the mall’s request would also require organizers to remove posts with plans of the demonstration from social media and to send out notifications that the event has been canceled. The mall, which is privately owned and doesn’t allow protests, contends that another demonstration would mean more lost sales for its vendors.

“The Mall of America is no more an appropriate place for a demonstration than it would be around my dinner table,” she said.