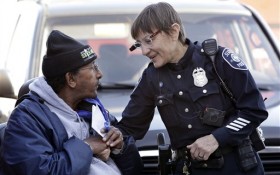 Like them or not, the use of police body cameras is spreading. Advocates say they keep both police and citizens honest about encounters with law enforcement.  But one thing most people haven’t thought of is how the footage can become a serious invasion of privacy.

Videos of police shootings have become critical to determining what happened in situations that turn deadly. In some cases, strapping cigarette pack-size cameras to officers’ uniforms has been framed as a way to stop the deteriorating trust of law enforcement.

It’s not that simple. While the recordings may help get to the truth of an incident with police, they also record distraught victims, grieving family members, people suffering from mental illness, and citizens exercising their rights to free speech.

And if all body camera footage becomes public — as some are calling for — these private moments become public, too. States are trying to strike the balance between a citizen’s right to privacy and police transparency.

The use of police body cameras is still in its infancy, with no official count for how many of the 18,000 state and local departments have turned to them. But dozens of agencies across the country are testing them, and many have plans to roll them out more broadly.

A policy to release all police-recorded videos could mean footage of the inside of a person’s home or a hospital would be available. But if the policy is not to release footage in order to protect a person’s privacy, that could mean a video of an officer shooting someone would not be made public, defeating the main purpose of the use of these cameras.

“What started as an effort to capture or prevent bad police behavior, I think now we’re starting to see the realities of it capturing true human suffering,” Frank Straub, chief of the Spokane, Washington, police department, said earlier this year at a policy forum on Capitol Hill.

The solution is somewhere in the middle. Some departments redact the faces of bystanders or those arrested, or blur a video so much that little is recognizable. Others won’t release video if it’s part of an ongoing investigation. Some policies allow officers to turn their cameras on and off. Even completely uncensored footage may not crystallize an incident because it’s taken from one officer’s physical position, often a moving one. This can create shaky footage and in some cases won’t capture all details of a violent encounter.

State laws vary about what the public can see. Existing recordings are covered under these laws, such as videos from cameras mounted inside patrol cars. But body cameras produce more footage than dashboard cameras — footage that can show officers inside peoples’ homes and other private places.

Police in Seattle received so many requests for body-camera footage under the state’s open records law that the department decided to proactively release videos on a YouTube channel that have been overly censored. Some are blurred to the point of no recognition. An activist who once pushed the department to be more transparent is now working on the project, Seattle police spokesman Sean Whitcomb said.

Washington’s public records laws are among the most liberal and do not require that agencies censor or blur videos the way Seattle is doing.

Michael Moynihan, 32, of Seattle, was arrested in Seattle on Jan. 19 during a demonstration to protest police violence. His full name, address, phone number and birth date were publicly available on a body camera video released after The Associated Press asked for the footage under state law.

Months after the arrest, Moynihan has not been charged, and his case is under review, according to the police department. He said he supports police wearing body cameras but that his own experience shows possible unintended consequences.