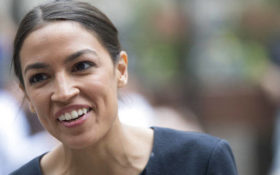 Rep. Alexandria Ocasio-Cortez, D-N.Y., tried to spread nasty lies regarding the peaceful Second Amendment rally in Richmond, Virginia on Sunday — and in response, she received a “much-needed reality check” on social media, according to one conservative journalist.

“There’s this gun rights protest that’s going on in Richmond … on MLK Day, but here’s the image that has [stuck] with me the most,” Ocasio-Cortez said. “When we go out and march for the dignity and the recognition of the lives of people like Freddie Gray and Eric Garner, the whole place is surrounded by police in riot gear without a gun in sight.”

“And here are all of these people flying Confederate flags with semiautomatic weapons and there are almost no police officers at that protest,” she claimed. “So who or what are our institutions protecting from who? And that image conveys it all, conveys it all.”

Of course, Ocasio-Cortez is lying about the protest, which was attended by an estimated 22,000 Second Amendment advocates. Protesters braved Monday’s bitterly cold weather to make their voices heard.

According to reports, only one “Confederate Flag” was seen at the entire protest.

There was a huge police force present during the protest.

And the crowd was diverse and peaceful.

The Washington Examiner reported that “police officers from the Virginia State Police, the Virginia Capitol Police, and the Richmond police deployed on rooftops and patrolled on bicycles and in cars during the Richmond demonstration. The FBI additionally worked with local law enforcement to weed out ‘threats of violence’ ahead of time.”

Despite the massive gathering, police said no violence was reported and only one arrest was made — a reported counter-protester was arrested by police for allegedly violating Virginia’s anti-mask law, which was designed to help authorities fight back against the Klu Klux Klan.

There were over 500 state troopers and over 100 Richmond Police officers assembled and ready to deploy if the crowd was violent. It wasn't, so they got paid to just hang out nearby. No need to have them marching through a peaceful crowd.

Thousands of armed people and no anti-riot police needed speaks a lot of conservatives. Compared to the destruction that leftists and progressives bring when they protest.

Over 20,000 rally at the Virginia statehouse—most of them with guns. No violence. Imagine that.

Thank God for the 2nd Amendment.

The MSM never learn and keep getting it wrong. https://t.co/UNY4plwBoP

Wow THOUSANDS of 2nd ammendment folks showed up at the Capitol in Virginia and some with firearms AND NOT A SINGLE ARREST or ISSUE they even stayed after to pick up trash…. now compare that to some other protest ???? thinking