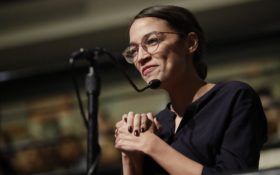 Reports indicate that the far-left lawmaker may be back to bartending by the next election — and it’s her own Democratic Party that could drive her out.

The state of New York is projected to lose up to two House seats after the 2020 census results are tallied.

State Democratic leaders would have to redistrict and eliminate two of their current House representative districts, making their congressperson ineligible for reelection.

President Donald Trump’s administration attempted to include a citizenship question in the upcoming census but ultimately dropped the bid after being blocked by liberal courts. Still, experts say the effort will likely hurt Democratic congresspersons from districts with high amounts of illegal immigrants.

According to reports, that makes AOC’s district particularly vulnerable for elimination because over 25 percent of residents are foreign-born — many of whom are illegal.

While stunning, the news isn’t totally unexpected by Ocasio-Cortez and her team. Since February, establishment Democrats have been planning to mount a primary challenge to the far-left socialist leader.

AOC has been active in her district as well, and her reelection campaign has held events in her district that encourages local residents — even illegal immigrants — to fill out their 2020 census forms.

“Our strategy is all about building trust in the community before the enumerators even come to your door,” Ocasio-Cortez told local New York paper The City about a recent census pop-up event.

Should Ocasio-Cortez’ district be eliminated?

Should Ocasio-Cortez' district be erased from the House of Representatives?