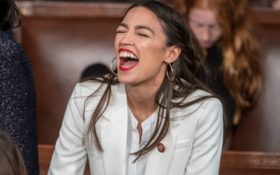 Rep. Alexandria Ocasio-Cortez, D-N.Y., made a huge gaffe last week — and it will have her supporters seeing red.

Ocasio-Cortez made waves five months ago when she called the detention centers on the U.S.-Mexico border “concentration camps” being run by President Donald Trump.

But last week, she was calling for the return of a much darker period of U.S. history — internment camps for U.S. citizens.

Ocasio-Cortez said the Democratic Party should go back to the way it was in the past. Specifically, she called for a return to former President Franklin Delano Roosevelt’s values.

Social media users quickly pointed out that Ocasio-Cortez wanted to return the Democratic Party to its roots… when the Democratic president was rounding up thousands of Japanese-American citizens and holding them without trial for the duration of World War 2.

She also said she wanted the Democratic Party to return to its roots as the party it was during the passage of the Civil Rights Act.

Democrats were also the party that opposed the Civil Rights Act and filibustered the bill for 75 days until Republicans were able to get it passed through the Senate.

The Dems filibustered the civil rights act for 75 days in the Senate when it was introduced to the floor…learn your History…unless, of course, this is the kind of action you were referring to????

7 of the 9 civil rights acts in our nation were signed into law by Republican presidents.

Of course, if you go back in history any further and the Democratic Party’s ugly history becomes even worse.

The Democrats were the party of the Klu Klux Klan after the Civil War.

They were the party of racist Jim Crow laws. They voted against women gaining the right to vote.

Before that, the Democrats opposed equal rights for African-Americans and were against the emancipation of slaves.

Of course, this isn’t the first time Ocasio-Cortez has gotten her history confused.

According to RedState, she made a similar statement at a fundraiser in September.

Ocasio-Cortez, widely known as AOC, invoked former President Franklin Roosevelt, the father of the Depression-era New Deal and another New Yorker known by his initials, several times during her 20-minute speech, which was interrupted numerous times by applause from the roughly 1,000 attendees at the 44th annual fundraising Truman dinner for the Boulder County Democratic Party.

If Democrats want to “live up to our values,” she said, “we are going to have to become a stronger party, a braver party and a more innovative party. We need to earn the right to represent people in this country. The way that we do that as a party is to come home to our FDR roots as a party. We need to come home and make sure that the Democratic Party is the progressive party once more.”