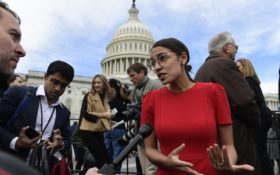 The Fox Nation host’s choice of costume was an easy one.

It wasn’t a monster.

It was the boogeyman.

It was “the thing that scares me most,” she wrote on a social media post depicting her costume.

So she dressed up as none other than the most famous socialist in America: Ocasio-Cortez.

This Halloween I decided to dress up as the thing that scares me most, the Democratic Dimwit Darling herself. I'm not afraid of ghouls, ghosts, zombies or political incorrectness. I am far more terrified AOC was actually elected to the United States Congress. Talk about a haunted House… #TeamTomi #halloween #AOC #SocialismKills

“This Halloween I decided to dress up as the thing that scares me most, the Democrat Dimwit Darling herself,” Lauren wrote. “I’m not afraid of ghouls, ghosts, zombies or political incorrectness. I am far more terrified AOC was actually elected to the United States Congress. Talk about a haunted House…”

The costume was capped off with the conservative pundit holding copies of both “The Communist Manifesto,” and a folder mocking the Green New Deal, Ocasio-Cortez’ infamous bill that tried to ban cows and airplanes.

While Lahren’s “AOC outfit” may have been a first, the two political figures are hardly unfamiliar with each other.

They have a rocky history.

In July, the two engaged in a spat over Twitter when Ocasio-Cortez attacked the U.S. Customs and Border Protection detention centers on the U.S.-Mexico border.

“Just left the 1st CBP facility,” she wrote at the time on Twitter. “I see why CBP officers were being so physically &sexually threatening towards me. Officers were keeping women in cells w/ no water & had told them to drink out of the toilets. This was them on their GOOD behavior in front of members of Congress.”

Lahren shot back, saying, “You have zero awareness of what our @CBP officers do on a daily basis. Are you surprised they don’t want to be around you? No law enforcement official would. You’re completely out of line and a disgrace to this nation. I feel sorry for our @CBP officers who had to be near you.”

Liberals on social media quickly responded to the outfit and called Lahren offensive.

For all those crybabies out there triggered by my Halloween costume and others: it’s Halloween, calm down. Thought you Lefties would love a day that legitimizes going door-to-door asking for free things, anyway. #staytriggered