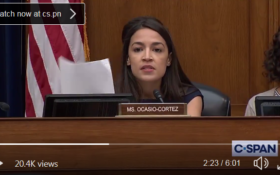 That changed during a heated exchange with former acting Immigration and Customs Enforcement (ICE) chief Thomas Homan on Friday.

When faced with an expert on illegal immigration, Ocasio-Cortez was quickly shutdown.

Ocasio-Cortez started the exchange by accusing Homan of authoring a document authorizing family separation at the U.S.-Mexico border if migrants are caught trying to pass illegally into the United States.

“There were three different [official] recommendations presented” to stem the tide of illegal immigrants at the southern border, Ocasio-Cortez said while holding a document signed by Homan.

“So you provided the official recommendation to Secretary Nielsen for the United States to pursue family separation?” Ocasio-Cortez asked.

“I gave Secretary Nielsen numerous recommendations on how to secure the border and save lives,” Homan replied.

“The same as it is for any U.S. citizen that gets arrested with a child,” Homan responded.

“Zero tolerance was the policy that was interpreted that separated [illegal immigrants] from their families,” Ocasio-Cortez said.

That’s when Homan dropped the hammer — and it left Ocasio-Cortez stuttering and unable to respond.

“If I get arrested for a D.U.I., and I have a young child in the car, I will be separated,” Homan shot back. “When I was a police officer in New York, and I arrested a father for domestic violence, I separated that father from his family.”

“Mr. Homan, with all due respect, legal [aslyum claimers] are not charged with any crime,” Ocasio-Cortez stated, falsely.

“When you enter the country illegally, it’s a violation 8 of United States Code 13-25,” Homan responded.

“If you want to seek asylum, go to the port of entry and do it the legal way,” Homan shot back. “The Attorney General of the United States has made that very clear.”

You can watch the heated exchange here.

Ocasio-Cortez’ attack on Homan starts at the 2:20-minute mark.

Exchange between @RepAOC and Thomas Homan