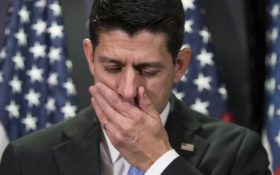 Former House Speaker Paul Ryan is back — and he’s taking to the mainstream media in order to trash President Donald Trump.

Ryan spoke to an author of a new book, “American Carnage” — and he wants to convince liberals that he, too, hates Trump.

It didn’t work. Rather than win over support, Ryan is being trashed on social media by both conservatives and liberals alike.

Paul Ryan was nothing but a RINO. He didn’t care about this country, he never cared about making life better for every day Americans. He only cared about himself and that’s why he quit.

A glimpse of Paul Ryan trying to be a hero after leaving office…. pic.twitter.com/WP2I2j2UKY

Paul who? The one who promised the president he’d get his wall AFTER the midterms? “Paul Ryan says he saw retirement as an 'escape hatch' from Trump” @realDonaldTrump https://t.co/GIfW2T4mVN

The stunt cost Ryan the last shred of credibility he had remaining, and didn’t win him any of the admiration from moderates and liberals he thought it would.

“I told myself I gotta have a relationship with this guy to help him get his mind right,” Ryan said. “Because, I’m telling you, he didn’t know anything about government … I wanted to scold him all the time.”

According to the author, Ryan says he saw early retirement as an “escape hatch” to get away from Trump.

Ryan’s office denied that, and his spokesperson said the congressman retired for personal reasons.

“He’s been very clear that he retired because he wanted to spend more time being a father and a husband,” the spokesperson said.

Do you support Ryan? Or Trump?