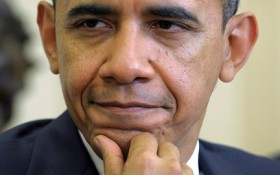 On Wednesday, the Obama Administration caught the Republican Senate majority off guard as news reports surfaced that Nevada Republican Governor Brian Sandoval was being considered to fill the vacancy on the United States Supreme Court.

While Republicans have promised not to consider any nominee before Obama leaves office, their refusal to consider a member of their own party could be used to make the GOP appear obstructionist during an election year.

But while Obama is attempting to turn the Supreme Court nomination into a public relations war, it’s one he’s sure to lose once the public begins to learn more about Sandoval.

Because it’s become clear that, even if he nominates Sandoval, Obama is doing what millions of Americans have feared he would do. He’s trying to replace the very anti-abortion Antonin Scalia with Sandoval, who is pro-choice.

In fact, on the issue of abortion Sandoval has much more in common with the court’s liberal justices and could be counted on to side with them.

Sandoval’s potential nomination was suggested by none other than Sen. Democratic leader Harry Reid of Nevada, a close ally of Obama. Shortly after Reid’s recommendation, reports surfaced that Sandoval was indeed on Obama’s short list.

Republicans have showed no signs of backing down. A few Republicans, including Senate Majority Leader Mitch McConnell, have said they would not even meet with the nominee when that person makes customary introductions on Capitol Hill.

“Why would I? We’ve made the decision,” said Sen. Orrin Hatch, R-Utah, a committee member.

Filling the vacancy left by Scalia’s unexpected death on Feb. 13 is crucial because the Supreme Court now has a 4-4 ideological split between justices who are usually conservative and those who are in its liberal wing. The battle has invigorated both sides’ interest groups and voters who focus on abortion, immigration and other issues before the court.

After meeting privately with GOP senators Tuesday, McConnell and other leaders said rank-and-file Republicans were overwhelmingly behind the decision to quickly halt the nomination process.

McConnell spokesman Don Stewart said Wednesday that the leader’s office is working with the White House to schedule a meeting with the president, but he said that McConnell’s position will not change.

“The leader welcomes the opportunity to reiterate to the president directly that the American people will be heard on this matter, and the nomination will be determined by whoever wins the presidency in the fall,” Stewart said.