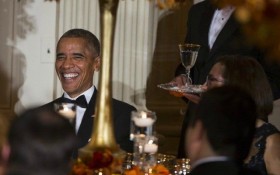 Many U.S. presidents announce a series of pardons during their last year in office. And speculation on who President Obama may be preparing to pardon on his way out the door has already begun.

Obama has remained deeply unpopular throughout much of his presidency — and his list of possible pardons may not do much to change that.

Here are a few pardon possibilities — and one could reshape America forever:

The Chicago slumlord donated at least $250,000 to Obama as the future president was starting his political career. Rezko also engaged in a shady real estate deal that let Barack and Michelle Obama purchase a luxury home in an elite Chicago neighborhood at a discount. Convicted of 16 separate offenses in 2011 and sentenced to more than 10 years in prison, Rezko was released last November to a halfway house. Pardoning this crony would be the Chicago way.

Obama’s pal Bill Ayers and his wife, Bernardine Dohrn, were never convicted of a felony for their admitted roles in a series of planned terror bombings for the Weather Underground in the 1960s. But in 1981, their close friends and associates robbed a Brinks armored truck and killed two policemen and a security officer. While Kathy Boudin was in prison, Ayers and Dohrn raised her son, Chesa. Though she’s since been released, Obama could pardon Boudin to wipe her record clean – as well as her accomplices David Gilbert, Mutulu Shakur, and Judith Alice Clark – as a favor to Ayers. (All remain close, and Gilbert edited Ayers’ book, “Prairie Fire”.)

Mumia Abu-Jamal (whose real name is Wesley Cook) is the most celebrated death row inmate in history. The onetime Black Panther murdered Philadelphia police officer Daniel Faulkner in cold blood in 1981. Despite reams of evidence, celebrities and left-wing activists have demanded his release, insisting that someone as educated as this former radio ranter must be innocent. Obama tried to name a lawyer who worked to spring Jamal, Debo Adegbile, to run the Justice Department’s Civil Rights division in 2013, so he’s clearly not hostile to the cop-killer’s case.

Leonard Peltier was a member of the American Indian Movement (AIM), which aimed to be to American Indians what the Black Panthers were to African-Americans. Peltier murdered two FBI agents on the Pine Ridge Indian Reservation in South Dakota in 1975 and was sentenced to consecutive life sentences in prison two years later. His release is supported by Robert Redford and rocker Steven Van Zandt, among others. Pardoning him would allow Obama to think he is standing in solidarity with an oppressed people.

Shakur, whose real name is JoAnne Chesimard, committed bank robbery and murder on behalf of the Black Liberation Army before killing a New Jersey state trooper in 1973. Her domestic terrorist friends broke her out of prison in 1979, and she fled to Cuba as a political refugee from the “racist” American justice system five years later. She remains on the island in defiance of U.S. law to this day. She is also tied to hip-hop culture as the godmother of murdered rapper Tupac Shakur, her mother’s stepson. After Obama restored relations with communist Cuba, what better sign of peace and harmony could he make than letting an American communist hiding there come home?

Between 1996 and 2001, environmental extremists committed 25 acts of domestic terrorism, most significantly torching the University of Washington and a posh ski resort in Vail, Colorado. Their crime spree spread across six states and did $48 million worth of damage. The members of the shadowy group called “The Family” belonged to the Animal Liberation Front (ALF) and the Earth Liberation Front (ELF). Obama could see these young upstarts, who burned down the playgrounds of the wealthy, as brothers-in-arms and pardon some of them.

7. Mass amnesty for all illegal immigrants

While pardoning whole groups of criminals, while unusual, is not unprecedented. President Andrew Johnson pardoned everyone who took part in the Civil War in 1865, and Jimmy Carter granted executive amnesty to all draft dodgers in 1977. To make his action more palatable, Obama could specify that his action applies only to DREAMers – young people brought to this country illegally by their parents. Or he may choose not to pardon every crime and require that they pay a financial penalty for obtaining fraudulent Social Security cards or the like.

The move would be hugely controversial — but according to legal experts, Obama certainly has the ability to do so. P.S. Ruckman Jr., a professor of Rock Valley College in Illinois, told NPR, “I don’t think there’s anyone who would argue the president doesn’t have that power.”

And it would accomplish a second goal – securing millions of new Democratic voters, tilting the balance of power in U.S. politics to the far-left forever.

Could a president committed to fundamentally changing the United States resist making the biggest, most audacious power play yet?