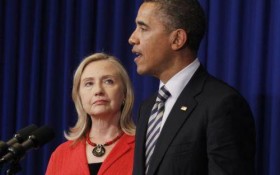 Former Secretary of State Hillary Clinton has been under investigation by the FBI for months over her allegedly illegal use of classified government secrets in her non-government approved private email server set-up.

With Clinton’s potential federal indictment looming during a crucial presidential election year, is President Barack Obama so desperate to protect her that he’s willing to change the law?

That may be exactly what he’s up to, based on a recently leaked Obama administration memo, made out by Director of National Intelligence (DNI) James Clapper.

The memo — dated March 17 — shows the White House is quietly considering eliminating the lowest level of classification for government secrets. In other words, making ‘confidential’ secrets no longer ‘confidential’.

And in doing so, critics say, the administration would effectively pardon Clinton in her growing email scandal.

According to The Hill, this proposed move may have “beneficial effects” for Clinton, “whose private email server contained thousands of messages now considered classified. The vast majority of the roughly 2,000 documents on Clinton’s machine are considered confidential.”

Politico reports that — should the State Department fall in line with the DNI initiative — 96 percent of Clinton’s emails would be retroactively unclassified.

And that could be enough to let her off the hook.

Recently, Obama has come under fire by the mainstream media for his meddling in the Clinton email scandal.

In an interview with Fox News Sunday, Obama seemed to embrace the Clinton campaign’s suggestion that the root of the controversy is over-classification — that too much government information is classified by bureaucrats after the fact. And notably, Obama weighed in with his views on Clinton’s intent, calling it mere “carelessness” on her part.

This wasn’t the first time that Obama has suggested that he doesn’t care for the email controversy. In October, he said flatly he didn’t think the set-up posed a national security problem.

And these statements have caused growing criticism that Obama had put his finger on the scale with his recent comments about Clinton’s use of a private email server during her tenure as secretary of state.

Each time he weighs in, it raises legal experts’ eyebrows and roils political adversaries. Republicans this week have suggested Obama is signaling prosecutors to go easy, and using a different standard for Clinton than has been applied to other administration officials investigated for mishandling information, like former CIA Director David Petraeus.

The White House routinely dodges questions about ongoing Justice Department investigations, saying it does not want to appear to be trying to influence the outcome. Obama’s decision to twice express his thoughts on Clinton seems to cast aside some of that caution in favor of defending a political ally and former administration official.

“It does raise concerns for prosecutors,” said Peter Henning, a law professor at Wayne State University and a former federal prosecutor. “If it’s a close case, how am I to judge whether to pursue charges when the president has said he doesn’t think there’s anything there? I don’t think it will prejudice any decision but it certainly gives the appearance of that.”

If Obama isn’t successful in influencing the Justice Department investigation, he could instead pressure the State Department to simply declare most of Clinton’s emails retroactively unclassified.

You can read the Obama administration memo here.