Vote now: Who was America's greatest president? - The Horn News 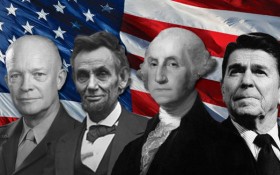 Throughout America’s history we have had presidents who have led us through wars, economic hardship, national tragedies and more.

In honor of Presidents’ Day, The Horn News has compiled a list of all the presidents in U.S. history — and we want to know who you think was the greatest.

Was it one of the founding fathers who built our great nation? Or the “Great Emancipator,” Abraham Lincoln? Or Ronald Reagan, for defeating the Soviets?

Cast your vote below, and we’ll be publishing the list of the top 10 American presidents, chosen by our readers.