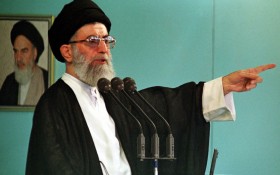 Maybe trusting the Iranians wasn’t such a good idea after all.

Just as Senate Democrats yesterday were working to defeat a Republican challenge to President Barack Obama’s nuclear pact with Iran, we learned that Iran may not be the peaceful partner Obama has been promising.

The Iranian Supreme Leader, Ayatollah Khamenei, promised in a speech Thursday to destroy Israel and that the country “won’t exist in 25 years.”

Opponents of the deal are pouncing on Khamenei’s words, warning that the same country that chants ‘Death to America’ just might have ill intent toward our nation, too.

Polls show that Americans oppose the Iran deal by a 2-1 margin. Here are the five key reasons why critics say the pact is a bad deal:

1. NO ONE HAS SEEN THE TWO SEPARATE AGREEMENTS THAT NUCLEAR INSPECTORS NEGOTIATED WITH TEHRAN

The Obama administration has not provided Congress with the text of two so-called “side agreements” that the International Atomic Energy Agency negotiated with Tehran. The law that gave Congress a chance to review the agreement for 60 days required the president to give lawmakers all relevant documents.

Republicans claim the 60-day clock never started and that they can’t cast votes on the deal because they are still waiting for all the documents.

Rep. Mike Pompeo, R-Kan., said, “We have members of Congress stand up and demand that they see the text of bills that rename post offices and yet this is a historic agreement and many of my colleagues are saying they are going to vote for it without even knowing what the details are about important components about how we’re going to verify whether the Iranian regime has complied with this agreement,” he said.

2. IRAN IS GETTING MORE THAN $100 BILLION FROM ECONOMIC SANCTIONS RELIEF

Opponents are outraged that Iran, a country that the State Department has labeled a state sponsor of terrorism, will be getting at least $100 billion in relief from economic sanctions that have choked Iran’s economy for years. They worry that Iran will use the money to ramp up its weapons programs and expand military assistance to forces in Syria, Yemen, Lebanon and elsewhere that oppose the U.S. and its allies.

Treasury Secretary Jacob Lew says that after sanctions are eased, Iran will be able to freely access about half of some $100 billion in foreign reserves. He said more than $20 billion is inaccessible because it is committed to projects with China and tens of billions of other restricted funds are in non-performing loans to Iran’s energy and banking sector.

On top of that, world powers say they’ll eliminate oil, trade and financial restrictions that have severely damaged Iran’s economy. Such action could create hundreds of billions of dollars in economic growth.

Critics of the deal have said repeatedly said that the inspection guidelines outlined in the plan will not be rigorous enough to prevent Iran from cheating.

“Rather than anytime/anywhere inspections, the deal creates a process within which Iran can delay inspections for at least 24 days,” said Senate Majority Leader Mitch McConnell, R-Ky.

4. THE DEAL PAUSES, BUT DOESN’T END IRAN’S PROSPECTS FOR A NUCLEAR WEAPON

Opponents say that Iran will still be able to develop nuclear weapons in the near future.

Sen. Bob Menendez, D-N.J., who was one of just four Democrats in the Senate to oppose the deal, said the deal only manages or works to contain Iran’s nuclear ambitions.

“My overarching concern is that it requires no dismantling of Iran’s nuclear infrastructure and only mothballs that infrastructure for 10 years,” Menendez said.

“The [Iranian] hardliners can use the freed-up funds to build an ICBM (intercontinental ballistic missile) on their own as soon as sanctions are lifted and then augment their ICBM capabilities in eight years after the ban on importing ballistic weaponry is lifted, threatening the United States,” said Sen. Chuck Schumer, D-N.Y., who also opposed the deal.

Even though opponents of the Iran nuclear deal can’t win in Congress, they aren’t going to go quietly.

Conservative Republicans are vowing to take President Barack Obama to court, claiming he has broken the law by not providing Congress with all relevant documents pertinent to the deal.

“This debate is far from over, and frankly, it’s just beginning,” House Speaker John Boehner, R-Ohio, said Thursday. “This is a bad deal. … We’ll use every tool at our disposal to stop, slow, and delay this agreement.”