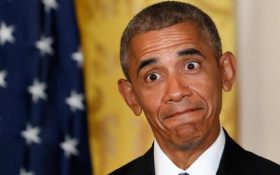 Critics warned that President Barack Obama’s revealed $400 million “ransom” payment to Iran would embolden America’s enemies to demand more. Some policy makers warned that our country’s weakness would be tested internationally in response.

Now, it’s happening — and it’s from one of our so-called NATO allies!

Turkey’s justice minister warned Tuesday that his country would tear up their alliance with the United States if Obama refused to comply with their demands to extradite a suspicious U.S.-based Muslim cleric who the government says is behind the July 15 failed coup.

Bekir Bozdag also told the state-run Anadolu Agency that anti-American sentiment in Turkey is reaching “its peak” over the issue of cleric Fethullah Gulen’s return, and risks turning into hatred.

Turkey has branded Gulen’s movement a terror organization and wants him returned to Turkey to face trial. Washington has said it would need more evidence of the cleric’s involvement before they complied, and says the regular extradition process must be allowed to take its course.

Gulen, who lives in self-imposed exile in Pennsylvania, has denied involvement in the violent coup attempt that left more than 270 people dead.

“If (the United States) does not return him, it will have sacrificed Turkey to a terrorist,” Bozdag’s warning stated.

In his weekly address to legislators of his ruling party, Prime Minister Binali Yildirim on Tuesday vowed to bring Gulen to justice.

“That terrorist head will come to Turkey and be brought to account. That man who ordered the bombing of Turkey and the parliament, who pointed Turkey’s armaments toward the Turkish people will get the punishment he deserves,” Yildirim said.

The government has launched a sweeping crackdown targeting Gulen’s followers in the aftermath of the coup.

Bozdag said Turkey has formally arrested 16,000 suspects pending trial, with 6,000 others still being questioned. At least 7,668 other people are under investigation but not detained, he said.

In addition, tens of thousands of people with suspected links to Gulen have been suspended or dismissed from their jobs in the judiciary, media, education, health care, military and local government.

The purges continued on Tuesday, with Turkey’s government-run Directorate of Religious Affairs announcing it had dismissed some 2,560 more employees suspected of ties to the Gulen movement, raising the number of people ousted from the agency since the failed coup to 3,672. The Directorate said some of them were employed abroad. It was not immediately clear how many of those removed from posts were preachers or teachers of the Quran.

European nations and human rights groups have expressed alarm over the scope of Turkey’s crackdown, triggering anger from Turkish officials who have complained of a lack of support for Turkey over the failed coup.

Obama has remained largely silent on the issue.

Yildirim said Turkey will employ 15,000 new teachers and recruit 10,000 new police officers to replace teachers and police who have been purged over their suspected ties to the movement.