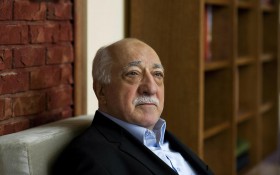 The Clinton family and Hillary Clinton’s campaign are being accused of accepting millions of dollars from what at least one U.S. ally is calling a terrorist network.

The U.S.-based Muslim cleric Fethullah Gulen is a longstanding ally of Hillary Clinton and her husband, former President Bill Clinton, and their cozy relationship has included dinners and speaking arrangements throughout the years.

He is suspected of controlling $25 billion in global assets and his followers have reportedly poured millions into the Clinton Foundation and Hillary Clinton’s presidential campaign.

But now Gulen has been accused in a U.S. court of being the ringleader of an international terrorist network, and Turkey is calling on America to extradite Gulen.

A Turkish government-backed lawsuit has been filed against Gulen and alleges that the Muslim cleric orchestrated human rights abuses from his residence in Pennsylvania against three men in Turkey.

A lawyer hired by the Turkish government, Robert Amsterdam, provided a copy of the filing in the U.S. district court in Pennsylvania. The lawsuit labels Gulen’s movement, which many have compared to a cult, as a terrorist organization.

Most recently, the lawsuit alleges, Gulen’s followers participated in a plot that led to the false imprisonment of three men in Turkey.

The controversial Islamic cleric’s cozy relationship doesn’t stop with the Clintons. In October, Gulen’s religious movement was accused of secretly funding up to 200 trips to Turkey for members of Congress and staff since 2008, and according to the USA Today report these trips may have repeatedly violated House rules and possibly federal law.

The lawsuit is part of a broad campaign against Gulen’s movement in Turkey and abroad. The government has carried out a purge of civil servants suspected of ties to the movement, seized businesses and closed some of Gulen’s suspected media organizations.

The suit alleges that Gulen targeted the three men because they were critical of his religious teachings, which critics say are almost cult-like.

Gulen continues to live within the U.S. borders carefree, residing in rural Pennsylvania and in regular contact with his Muslim followers.