Obama’s folly – Is Afghanistan lost to ISIS? - The Horn News 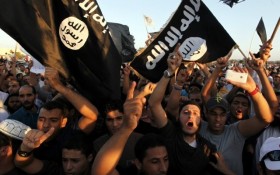 Through President Obama’s order, Afghanistan has seen a massive decline in the number of American troops in recent years. Now, ISIS is taking advantage, and their goal is clear – they want to take the Afghan capital from the US-friendly government at all costs.

ISIS is quickly making inroads into Afghanistan, deploying thousands of soldiers to the country and securing more recruits every day

The Islamic State territory gains are no longer confined to just Syria and Iraq, and the terror group’s expansion into Afghanistan has been a concern for both Afghan and international authorities for months. Officials have been sounding the alarm that the militant group was actively recruiting members from other Islamic militant groups, including the rival Taliban.

In some parts of the country, the extremists have actually begun controlling territory — executing rivals, banning girls from school and killing dozens of civilians for resisting their harsh rule, according to Afghan officials.

One of the first serious footholds in Afghanistan for the ISIS loyalists appears to be in the eastern province of Nangarhar, along the Pakistani border, according to two members of the Afghan parliament.

“Daesh in Nangarhar is growing and getting stronger compared with a couple of months ago. The people of the region are becoming increasingly concerned,” said Nangarhar MP Zahi Qadir, using an alternative acronym for the group. “In the areas where there are Daesh fighters, the schools have been closed and the Daesh fighters have beaten and abducted teachers.”

A second parliament member, Hazrat Ali, told The Associated Press that ISIS loyalists in Nangarhar have banned girls from attending school. Militants have gone door-to-door asking families about unmarried girls and “threatening to marry them to Daesh fighters if they are not married off by their families soon,” he said. “Where Daesh exists, there is no life, people are enslaved.”

At stake is more than just territory. Afghanistan contains billions of dollars in assets — mainly opium that produces most of the world’s heroin, but also minerals including gold, marble, chromite, lapis lazuli and gemstones.