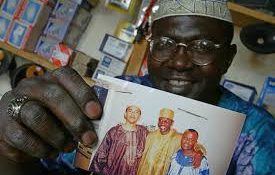 Malik Obama, the half-brother of former President Barack Obama from Kenya, dropped a controversial bombshell on social media on Tuesday.

His ex-wife won’t speak to him.

And he says that his personal bank, PNC, is closing down his account.

All because he supports President Donald Trump instead of his half-brother and the Democrats.

Malik posted the stream of accusations in a Twitter rant Tuesday.

“My ex-wife is not talking to me because I support @realDonaldTrump folks,” he wrote.

“…and @PNC is shutting down my bank account because I support @realDonaldTrump.”

“They’re shutting me down folks,” he wrote.

My ex-wife is not talking to me because I support @realDonaldTrump folks.

…and @PNCBank is closing my account because I support @realDonaldTrump.

Obama also posted the message he claimed to receive from a representative at PNC bank.

“Good Afternoon Mr. Obama,” the message read. “As a client can choose to exit our bank, we also have the right to exit relationships. PNC is exercising its right to end the relationship. Sincerely, LuAnn Pasquarello Customer Experience Manager 412-803-4410”

.@PNCBank "Good Afternoon Mr. Obama: As a client can choose to exit our bank, we also have the right to exit relationships. PNC is exercising its right to end the relationship.
Sincerely,
LuAnn Pasquarello
Customer Experience Manager
412-803-4410"

Malik Obama is known to be controversial. He spearheaded the birther conspiracy of Barack by posting pictures of his alleged Kenyan birth certificate.

The photo was later debunked.

Barack and Malik once had a close relationship. The two even served as best man for each other at their respective weddings.

But the two had a falling out around the time of Barack’s second term, according to NewsOne.

And in 2016, just months before the general election, Malik claimed he supported Trump over Barack’s political ally, former Secretary of State Hillary Clinton.

In turn, Trump invited Malik to his third presidential debate against Hillary.

And the rest was history…

Since then, Malik has been working to help Trump’s re-election in 2020.

Earlier this year he posted a message on social media endorsing Trump for the upcoming presidential election.

Now, he says he’s being silenced for speaking out.