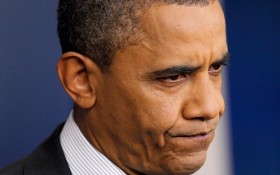 After nearly eight years under President Barack Obama, there is one fact that is undeniable — his presidency has been bad for the U.S. economy.

Now that his second term is nearing the end, however, it is becoming clear to economists just how bad Obama has been.

In terms of GDP growth, Obama is officially projected to be the fourth-worst president in U.S. history — the worst since the Great Depression under President Herbert Hoover.

And Obama will be the only U.S. president that has failed to deliver even a single year of 3%+ GDP growth.

During his presidency, liberals and Democrats pulled out statistic after statistic in a desperate attempt to deflect blame, or hide the facts. But there’s no more denying the numbers.

Gross domestic product, the broadest measure of economic health, expanded at a paltry annual rate of 0.5 percent in the January-March quarter, the Commerce Department reported Thursday. That is slower than the fourth quarter’s 1.4 percent growth rate, marks the weakest performance in two years, and officially cements Obama’s shameful economic legacy.

The poor start to the year did not escape notice among critics of Obama.

“Today’s report showing the weakest period of economic growth in two years is the latest sign the Obama economy isn’t working,” said Republican National Committee Chairman Reince Priebus. “Despite all of the evidence Obama’s liberal policies are leaving middle-class families behind and holding back growth, Hillary Clinton thinks this president doesn’t get enough credit and wants to double down on his failed agenda.”

The 0.5 percent GDP advance in the first quarter was the weakest showing since GDP contracted by 0.9 percent in the first three months of 2014.

“Assuming 2.67% RGDP growth for 2016, Obama will leave office having produced an average of 1.55% growth. This would place his presidency fourth from the bottom of the list of [presidencies], above only those of Herbert Hoover (-5.65%), Andrew Johnson (-0.70%) and Theodore Roosevelt (1.41%),” reports Real Clear Markets.

Part of the first-quarter weakness stems from the turbulence in the stock market at the beginning of the year, which was triggered by worries that China was slowing more than expected.

The market has since recovered all of its early-year losses, China’s slowdown now seems less worrisome and oil prices have stabilized and started to rebound. In addition, the U.S. dollar, whose strength had hurt American exporters, has stopped rising and retreated a bit.

Those developments and continued job growth will help bolster the economy in the current quarter and beyond, Behravesh and other analysts said.

But Brian Bethune, an economics professor at Tufts University in Boston, said the rebound could still be derailed if there are not “more positive growth trends overseas.”

Consumer spending, which accounts for 70 percent of economic activity, grew at a 1.9 percent rate in the first quarter. That’s down from 2.4 percent in the fourth quarter and is the weakest showing in a year.

Business investment dropped at a 5.9 percent rate, the biggest quarterly plunge since the depths of the recession in 2009. The decline was led by a record 86 percent plunge in the category that covers oil and gas exploration. U.S. energy companies have cut back sharply in response to falling global oil prices.

The higher deficit subtracted 0.3 percentage point from growth in the first quarter. A further slowdown in business spending to restock their store shelves also hurt growth.

The Federal Reserve on Wednesday took note of economic weak spots and decided for the third straight meeting to keep its key policy rate unchanged in a range of 0.25 percent to 0.5 percent. Many analysts don’t believe there will be a second rate hike until there are more signs of growth.

“The rate of real economic growth is the single greatest determinate of both America’s strength as a nation and the well being of the American people. And, Obama’s record in this area has been truly dismal,” says Real Clear Markets.