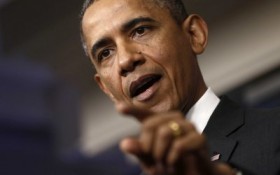 President Barack Obama’s advisors are finalizing a proposal that would expand background checks on gun sales… and they are planning to do it without Congressional approval.

White House advisor Valerie Jarrett says the president has asked his team to complete a proposal and submit it for his review “in short order.” She says the recommendations will include measures to expand background checks, and the administration plans to utilize the legally aggressive tool that Obama has become so fond of: an executive order.

After the mass shooting in Roseburg, Oregon, Obama said his team was looking for ways to tighten gun laws without a vote in Congress. White House officials have said they’re going after the so-called “gun show loophole” that allows people to buy weapons at gun shows and online without a background check.

In his efforts to work around Congress in the past, Obama has frequently made aggressive use of such executive power during his presidency.

Previously the administration has targeted immigration. And many legal scholars are warning that Obama has accelerated the drift of power toward the executive branch, and say there’s little debate that he’s paved a potentially dangerous path for his successor.

“Democrats have been remarkably shortsighted in embracing of this type of uber-presidency,” said Jonathon Turley, a George Washington University law professor.

“Unfortunately I think the bill will come due for many Democrats,” Turley said. “In a future administration, they will hear the same arguments played back to them as they watch a different president go after a different set of priorities.”

Experts view Obama’s influence as considerable when it comes to war powers, particularly his case for killing American suspects of terrorism on foreign soil. But a paradox is evident on immigration issues — where he has very publicly seized the broad authority given to the executive and where the gap between his policies and his potential Republican successors is wide.

In 2012 and 2014, after long maintaining he did not have such authority, Obama ordered federal immigration authorities not to deport certain groups of immigrants living in the U.S. illegally. The administration asked immigrants to apply for a temporary new legal status. The White House said it was using its prosecutorial discretion — the power to determine how limited resources should be used to enforce the law.

A future president might take the same principle into another arena, Turley argued, choosing not to enforce pollution regulation against some businesses or temporarily granting some taxpayers a reprieve.