Obama to embarrass our military in front of UN!? - The Horn News 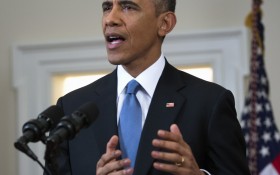 It’s a foreign policy move considered so weak it’s practically unprecedented. And President Barack Obama’s administration may be just days from executing it and humiliating America on the world stage.

According to a report from the Associated Press, the Obama Administration may not even try to stop the United Nations from issuing a formal condemnation of America’s long-standing trade embargo against Cuba.

This could be read as a slap in the face to our military, who so bravely stopped the communist plot to install nuclear weapons on the island during the 1962 Cuban Missile Crisis.

U.S. officials said that the Obama administration is considering abstaining from the annual U.N. General Assembly vote on a Cuban-backed resolution demanding that the embargo be lifted. The vote could come next month.

No final decision has yet been made, said four administration officials who weren’t authorized to speak publicly on sensitive internal deliberations and demanded anonymity. But merely considering an abstention is unprecedented. Following through on the idea would send shock waves through both the United Nations and Congress.

It is unheard of for a U.N. member state not to oppose resolutions critical of its own laws.

By not opposing the resolution, Obama would be effectively siding with the world body against the US Congress, which has refused to repeal the embargo despite calls from Obama to do so.

Presidential candidate Sen. Marco Rubio, who is Cuban-American, said that by abstaining, Obama would be “putting international popularity ahead of the national security and foreign policy interests of the United States.” The embargo, he said, denies money to a dictatorship that can be used to further oppression.

The American officials said the U.S. will consider abstaining if the wording of the resolution is different from previous years. The administration is open to discussing revisions with the Cubans and others, they added, something American diplomats have never done before.

Obama has urged Congress to scrap the 54-year-old embargo since December, when he announced that Washington and Havana would normalize diplomatic relations. The two countries re-opened embassies last month, and Obama has chipped away at U.S. restrictions on trade and travel to Cuba, using executive orders. But the embargo stands.

An abstention could have political ramifications in the United States, beyond the presidential race.

In Congress, where top GOP lawmakers have refused to entertain legislation to end the embargo, any action perceived as endorsing U.N. criticism of the United States could provoke anger — even among supporters of the administration’s position.

The U.S. officials, however, said the Obama administration believes accepting international condemnation could send a powerful signal to Congress and the world of Obama’s commitment to end the embargo.