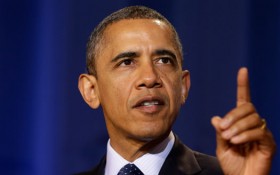 Following shocking revelations that the Obama administration covered up both key intelligence on ISIS and the effectiveness of the US-led airstrikes against the group, more damning information has come to light this week on the stability of the region.

Reports surfaced earlier this week that Obama administration officials have repeatedly changed intelligence reports on ISIS to make it appear like America’s efforts to defeat the terror group are succeeding. But top defense analysts have revealed a truth that most Americans aren’t hearing: ISIS may have permanently destabilized the Middle East, and more terror and bloodshed could be ahead.

The head of the Defense Intelligence Agency said Thursday, in a frank assessment that is at odds with Obama administration policy, that Iraq and Syria may have been permanently torn apart by the war with ISIS.

This means the flood of refugees coming to Europe and America isn’t going to stop any time soon. And ISIS is claiming it has hidden “thousands” of operatives among the migrants.

“I’m having a tough time seeing it come back together,” Lt. Gen. Vincent Stewart told an industry conference, speaking of Iraq and Syria, both of which have seen large chunks territory seized by ISIS.

On Iraq, Stewart said he is “wrestling with the idea that the Kurds will come back to a central government of Iraq,” suggesting he believed it was unlikely. On Syria, he added: “I can see a time in the future where Syria is fractured into two or three parts.”

That is not the U.S. goal, he said, but it’s looking increasingly likely.

CIA Director John Brennan, speaking on the same panel at an industry conference, noted that the countries’ borders remain in place, but the governments have lost control of them. A self-declared caliphate by ISIS straddles the border between both countries.

Iraqis and Syrians now more often identify themselves by tribe or religious sect, rather than by their nationality, he said.

“I think the Middle East is going to be seeing change over the coming decade or two that is going to make it look unlike it did,” Brennan said.

The Obama administration’s official policy is that Iraq and Syria remain internationally recognized nation states. Administration officials, for example, have fought against calls to send arms directly to the Kurds, who have been America’s most loyal ally in the region. The administration has insisted that arms for the Kurds be routed through the Obama-friendly government in Baghdad.

In Syria, the Assad government is hanging on with increasing support from Russia, leaving the country divided among government, rebel-held, and ISIS territory.