Obama letting in Muslim immigrants, not Christians - The Horn News 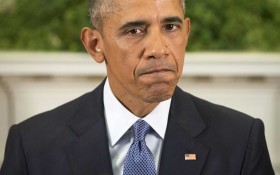 The opposition over President Barack Obama’s plans to accept 10,000 refugees from Syria over the next year has escalated in the wake of the terrorist attacks in Paris, with many Republicans questioning whether the United States can adequately screen Syrian migrants.

Now, critics are starting to accuse the administration of deliberately discriminating against Christian refugees in favor of Muslims.

Since the tragic November 13th Paris attacks, 132 Syrian Sunni Muslim refugees have been put through a controversial vetting process and granted admission into the United States.

Surprisingly, not a single Christian has been allowed into the United States from Syria during that time period, despite Christians making up approximately 10 percent of the country’s population.

That represents a rate of just 2.3% of all Syrian refugees. And it’s getting worse, not better, for the Christians seeking to come to America.

Since the fiscal year started on October 1, 98.8% of the 423 accepted refugees were Sunni Muslims, while just 1.2% were Christian. Critics have also pointed out that the Sunni Muslims the Obama administration is letting in aren’t just the “widows and orphans” that Obama mocked Republicans for being scared of.

There are more men than women among the refugees, and most the men are at –or near – the so-called fighting age. For example, 54 percent of the 423 recently-admitted refugees were male. Of them, 111 were between 14-50 years old.

“[Terrorists] are trying to exploit the refugee crisis out in the Middle East to insert fighters into foreign counties,” Sen. Marco Rubio told a New Hampshire audience in response to a voter who said Americans are concerned with immigration from a national security perspective. “We can’t ignore that.”

“I think a better solution is one that the people from the Middle East would agree with: Make it easier for them to stay in that part of the world,” Rubio said to applause from the crowd.