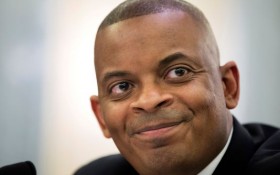 Another of President Obama’s Cabinet Members has been accused of corruption. Following in the footsteps of Former Labor Secretary Hilda, who is being investigated for violating fundraising rules on behalf of Obama, Transportation Secretary Anthony Foxx is being sued for taking money – without bothering to show up for work.

Foxx took the cash from a bus company while mayor of Charlotte, North Carolina, even though he didn’t do anything, according to a lawsuit filed in U.S. Bankruptcy Court.

The lawsuit was filed in North Carolina by Elaine Rudisill, a trustee for the bankrupt bus company, DesignLine USA. The suit seeks the return of $421,000 that Foxx was paid over four years as the company’s deputy general counsel.

The company’s records do not reflect any work performed by Foxx, according to the lawsuit.

The suit alleges that there was no general counsel for the company, and no evidence that Foxx was in contact with outside lawyers employed by the company. It charges that Foxx spent little or no time at the company’s offices.

Foxx resigned from the company on July 1, 2013, the day before he became transportation secretary, the lawsuit says.

DesignLine made hybrid-electric shuttle buses bought by the Charlotte Douglas International Airport, which the city owns. Foxx was the mayor from 2009 to 2013 and employed by DesignLine for roughly the same period.