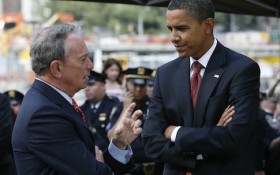 Analysts have indicated that Obama’s sweeping anti-gun executive order will expand restrictive background checks for gun ownership, but the White House has remained mute to the specifics.

Equally concerning to Second Amendment advocates are the political rumblings about gun sale restrictions for those on the terror watch list, a recent goal Democratic lawmakers have begun pushing.

While even the most gun-friendly politicians agree with the concept that guns should be kept out of the hands of terrorists, there is growing concern that the terror watch list will be used as a political tool to deny American citizens the right to own guns.

In other words, the government can put just about anyone on the list without much evidence or notification. And getting off the list is notoriously difficult.

A bill that would have prevented gun sales to people on the terror watch list failed in the Senate last week, largely over concerns that people would be targeted who have never been accused of a crime and in fact have no connection to terrorism.

U.S. Rep. Tom McClintock, a California Republican, said he was wrongfully placed on the no-fly list about a decade ago when he was a California state Senator. He said authorities later told him it was a case of mistaken identity after authorities confused him with an Irish Republican Army activist, and his name was eventually removed.

“I think it is a very dangerous concept they’re trying to introduce into our law,” McClintock said. “Fundamental rights, guaranteed by the bill of rights, can be denied to an individual by the act of a bureaucrat.”

“The problem is, access to the list is difficult,” said Scott Knight, the chief of police in Chaska, Minnesota, and former chairman of the firearms committee for the International Association of Chiefs of Police. “The criteria of how do people get on that list is not shared. So there are a number of logistical pieces that have to be worked out so the keepers of the list are then comfortable with sharing it in this arena as opposed to just air travel.”