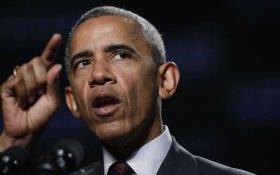 The judicial branch has finally stepped in and said “enough” — and it has some Obama rivals cheering.

A Virginia school board can block a transgender male from using the boys’ restroom when school starts next month, the U.S. Supreme Court ruled Wednesday. The ruling is considered by some to be a serious blow to the Obama administration’s recent guidelines issued to schools that warned against such laws.

In a 5-3 decision, the high court put on hold a lower court ruling that ordered the Gloucester County School Board to let Gavin Grimm use the bathroom that matches his gender identity. The school board is expected to ask the justices to further intervene in the case later this month.

The decision means Grimm will be barred from using the boys bathroom for at least the first half of his senior year, said Josh Block, an attorney with the American Civil Liberties Union who’s representing Grimm.

Because Grimm’s biological sex is female, she will be required to use the female bathroom — or, alternatively, use a private bathroom all Grimm’s own.

“The school board welcomes the Supreme Court’s decision as the new school year approaches,” the Gloucester County School Board said in a news release. “The board continues to believe that its resolution of this complex matter fully considered the interests of all students and parents.”

The school board says it plans to formally ask the Supreme Court to review the 4th U.S. Circuit Court of Appeals decision in Grimm’s case by the end of August and then it will be months before the justices decide whether to do so.

Grimm, who was born female but identifies as male, was allowed to use the boys restroom at his high school for several weeks in 2014. But after some parents complained, the school board adopted a policy requiring students to use either the restroom that corresponds with their biological gender or a private, single-stall restroom. Grimm argues the policy violates Title IX, a federal law that bars sex discrimination in schools.

The school board counters that allowing Grimm use the boys restroom raises privacy concerns and may cause some parents to pull their children out of school.

If the justices agree to hear Grimm’s case, the order will remain on hold until the court makes a final ruling, the court’s ruling said. If they deny the school board’s petition for review, the order requiring the board to let Grimm use the boys bathroom will be reinstated.

The appeals court sided with Grimm in April, saying the federal judge who previously dismissed Grimm’s Title IX discrimination claim ignored a U.S. Department of Education rule that transgender students in public schools must be allowed to use restrooms that correspond with their gender identity.

The appeals court reinstated Grimm’s Title IX claim and sent it back to the district court for further consideration. But the high court’s decision Wednesday puts Grimm’s case on hold until the justices decide whether to intervene.

Justices Ruth Bader Ginsburg, Sonia Sotomayor and Elena Kagan dissented. Justice Stephen Breyer said he agreed to put the case on hold to “preserve the status quo” until the court decides whether to weigh in.