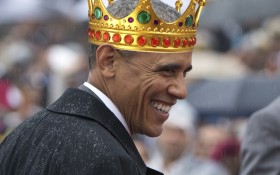 With the second term of his presidency winding down, President Barack Obama doesn’t appear to be going quietly. And he might not be going anywhere at all.

Shocking reports have emerged that Obama may be plotting to sell his endorsement to Vice President Joe Biden for a steep price. And the move is designed to give Obama direct say over the next two presidents.

Is he looking to transition from commander-in-chief to puppetmaster-in-chief?

As The Horn first reported last week, there is deep suspicion among the Hillary Clinton campaign that the Obama Administration has been actively working against Clinton and was behind media leaks involving her use of a private email server while Secretary of State.

A recent story from former New York Times Magazine editor-in-chief Edward Klein is adding fuel to the fire by claiming Obama is trying to cut a deal with potential Clinton rival Vice President Joe Biden that could swing the Democratic nomination in his favor.

Obama is reportedly willing to endorse Biden if the veep meets two conditions.

According to Klein, Obama is demanding that Biden, who is 72, only seek a single term in office, and that Obama gets to choose Biden’s vice president.

Klein reports that Massachusetts Governor Deval Patrick is the politician Obama is leaning towards. Patrick, the first African American governor in Massachusetts history, is “a close Obama ally.”

This would let Obama maintain at least some level of influence on the presidency for the next 12-years, should all go according plan.

Another possibility is that the Obama-Biden deal may have been leaked to let other candidates know the asking price for an Obama endorsement. Even if Biden stays out of the race, another candidate could take the bait and give Obama what he wants.

But for Biden, winning the Democratic nomination without Obama’s help could prove a challenge. Half a year into the presidential campaign, many of the Democratic Party’s top players have already placed their bets.