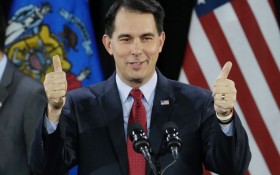 Wisconsin Governor Scott Walker’s gaffe-prone campaign continues to stumble. A new poll shows he may be falling out of contention for the GOP nomination — and the fact that he recently appeared open to building a wall across the Canadian border isn’t helping.

Walker, who was leading Iowa polls in July, is now sitting at 7% and is barely a top-five candidate, according to  Monmouth University polls.

And his recent suggestion that building a wall between Canada and the U.S. might be a “legitimate” idea prompted swift derision from fellow Republicans this week.

“Despite the attempts of some to put words in his mouth, Gov. Walker wasn’t advocating for a wall along our northern border,” Strong said. She said he meant that border security was a legitimate issue.

But the fact he appeared to entertain the notion of a northern wall brought a swift response.

“That’s a pretty dumb idea,” Sen. Rand Paul of Kentucky, a 2016 rival, told Boston Herald Radio. “There have been a lot of dumb ideas put out. One, that the Mexicans will pay for a wall, was probably the dumbest of dumb ideas. But putting a wall up between us and Canada is sort of a ridiculous notion.”

Donald Trump has proposed pressure tactics to persuade Mexico to pay for a wall along its border with the U.S.

The latest struggle for Walker comes after he’s had to backtrack and clarify his positions on immigration and terrorism, reassure jittery donors after his performance in the first GOP debate and reshape his campaign to try to rekindle the spark he showed months ago, when he quickly climbed into the top tier of candidates after impressing Iowans in a January appearance.

That’s meant trying to get back to basics in Iowa, where he’s aiming to visit all 99 counties.

“A lot changes between now and the caucuses,” he said last week after a two-day tour. “I think the most important thing we can do is get out and tell our story.”

The super PAC backing Walker plans to start broadcasting television ads in Iowa after Labor Day. If they don’t gain traction soon, this could be the end of Walker’s presidential hopes.