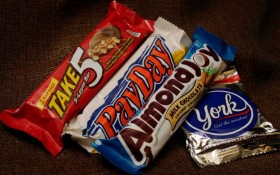 A Louisiana man accused of stuffing $31 worth of candy bars into his pockets faces a possible sentence of 20 years to life in prison, prompting a judge to question whether the sentence was “over the top.”

Orleans Parish prosecutors chose to charge Jacobia Grimes, 34, under a statute that boosts the alleged candy theft to a felony. The law applies to people who have been convicted of “theft of goods” at least twice. Grimes has five prior theft convictions, making him a “quad” offender under the state’s habitual-offender law.

“Isn’t this a little over the top?” Zibilich said. “Twenty years to life for a Snickers bar, or two or three or four.”

Grimes’ attorneys, Miles Swanson and Michael Kennedy, said his prior guilty pleas were for similar shoplifting attempts, including stealing from a Rite-Aid, Save-A-Center, Blockbuster Video, and Rouses grocery stores.

Swanson said all the thefts were for less than $500 worth of items. The last theft of socks and trousers from a Dollar General store got him a four-year sentence in 2010.

One of his lawyers said he could have been charged under a different statute than the habitual-offender law.

“They’re spending their time to lock someone up for years over $31 worth of candy,” Swanson said.

Grimes also faces a charge of drug paraphernalia possession. He is currently free on $5,000 bond, court records show. His lawyers say he has a heroin problem. Grimes also has convictions for possession with intent to sell fake drugs and obscenity, a crime committed while he was behind bars, the newspaper reported.

Christopher Bowman, a spokesman for the district attorney’s office, would not comment on the specifics of Grimes’ case, citing office policy. He emphasized that the alleged crime was considered a felony by the state.

The case appears to be an extreme example of a widespread practice in Louisiana, which criminal justice reform advocates say has one of the toughest habitual-offender laws in the country, the newspaper reported.