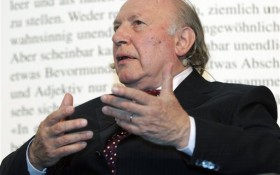 Imre Kertesz, the Hungarian writer who won the 2002 Nobel Prize for Literature for a body of fiction largely drawn from his experience as a teenage prisoner in Nazi concentration camps, died Thursday. He was 86.

Hungarian President Janos Ader said Kertesz’s life was a “gift” to all those who loved, knew, read and understood him.

“Like no one else, he saw so sharply and made others see so exactly the nature of dictatorships, ‘the age of irrationality,'” Ader said in a letter to the writer’s family. “He knew that the lack of external freedom can be endured only with the freedom of spirit.

“With his world-famous writing, he showed that man’s will to live and desire for freedom cannot be defeated by any tyranny,” Orban said.

Tribute was also paid to Kertesz in Germany, where he lived for a long time before returning to Hungary a few years ago.

“Through his work, Imre Kertesz brought a new tone to the remembrance of the darkest years of our history,” said Germany’s culture minister, Monika Gruetters. “As a witness, he wrote with great literary mastery of his harrowing experiences at the concentration camp. His books … are his legacy and will remain unforgotten and haunting history books for future generations.”

In a statement, Gruetters noted “the esteem that he showed for Germans despite his bitter experiences,” which she said found “noble expression” in his decision to entrust his archive to the Academy of Arts in Berlin.

Born in Budapest on Nov. 9, 1929, Kertesz, was 14 when he was deported to the Auschwitz concentration camp in German-occupied Poland in June 1944. He later was transferred to the Buchenwald camp from where he was liberated in 1945.

“As a child you have a certain trust in life. But when something like Auschwitz happens, everything falls apart,” he once said.

Yet Kertesz made a startling confession that he experienced “my most radical moments of happiness” at Auschwitz.

“You cannot imagine what it’s like to be allowed to lie in the camp’s hospital, or to have a 10-minute break from indescribable labor,” he told Newsweek magazine in a 2002 interview. “To be very close to death is also a kind of happiness. Just surviving becomes the greatest freedom of all.”

After returning to his native Budapest, Kertesz eked out a living as a journalist and translator.

Distrusted by the communist authorities who ruled Hungary after World War II, he spent his time translating into Hungarian the works of Friedrich Nietzsche, Sigmund Freud, Ludwig Wittgenstein and Elias Canetti in a small apartment overlooking the Danube River.

Influenced by the existentialist novels of Albert Camus and Jean-Paul Sartre, Kertesz was fascinated by the fate of the individual in an often totalitarian environment, where others decided his destiny.

“I am a non-believing Jew,” Kertesz once said in an interview. “Yet as a Jew I was taken to Auschwitz. I belong to those Jews whom Auschwitz turned into Jews.”

“Fateless,” the novel that together with other works brought him the 2002 Nobel, finally appeared in 1975 after a decade-long struggle to have it published.

It was largely ignored, both by the communist authorities and the public, in a country where awareness of the Holocaust remained negligible, despite the murder of around 500,000 Hungarian Jews by the Nazis and their Hungarian henchmen.

According to Kertesz, the quasi-taboo status suffered by “Fateless” for so long may have been because the book also reflected Hungary’s totalitarian communist system.

“I wrote ‘Fateless’ about the Kadar regime,” Kertesz said in an interview with the Hungarian weekly Elet es Irodalom, referring to communist dictator Janos Kadar, who ruled Hungary until shortly before the democratic changes of 1990.

“Whoever lived in the Hungary of the 1970s had to notice immediately that the author (of “Fateless”) knew the present and despised it,” Kertesz said.

To Kertesz, the process of adaptaing to the Holocaust described in his book could as well be applied to what happened to people in Hungary after the failed anti-communist revolution of 1956. In its citation for the Nobel Prize, the Swedish Academy also recognized this element of Kertesz’s writing.

“Kertesz’s message is that to live is to conform,” the academy said. “Individual experience seems useless as soon as it is considered in the light of the needs and interests of the human collective.”

Others said Kertesz’s work could be seen as a study of all repressive regimes.

“Kertesz’s significance was that in some sense he formulated the essence of totalitarianism,” said Gabor T. Szanto, a writer and editor of Szombat, a Jewish cultural magazine.

Numerous other novels, continuing the themes of the Holocaust, dictatorship and personal freedom, appeared throughout the 1980s and 1990s, winning Kertesz professional respect but not a wider audience.

That changed when he won the Nobel, which suddenly propelled him to domestic and international fame.

His infrequent personal appearances in Hungary in wake of the Nobel Prize were a massive success, with hundreds of people standing in line for hours to get his autograph on their copies of his books.

In his Nobel acceptance speech, Kertesz claimed with typical self-irony that he wrote only for himself. “I didn’t have an audience and didn’t want to influence anyone,” he said.

In literary circles, he was regarded as a jovial companion, with a harsh, no-nonsense critical eye. A typical gesture was his refusal to support a statue being raised in his honor alongside that of other Hungarian Nobel winners.

Still, Kertesz’s Nobel victory, making him the first Hungarian to win the literature prize, caused great resentment among some Hungarians who would have preferred that a non-Jewish countryman get the honor instead.

Kertesz described “Liquidation,” published in 2003, as his “last novel about the Holocaust.”

Set during Hungary’s transition from communism to democracy in 1989, he said it was about “people who did not experience the Holocaust directly — the second generation, who still have to deal with the Holocaust.”

Magveto Kiado said that during the last months of his life, even while ill, Kertesz helped prepare “The Viewer,” a selection of his diary entries between 1991 and 2001 which was published this month in Hungary.

A film version of “Fateless,” directed by Lajos Koltai and for which Kertesz wrote the screenplay, premiered in Hungary in 2005.

He is survived by his second wife, Magda.