No more killer whales at SeaWorld? - The Horn News 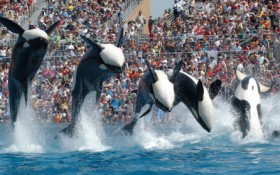 SeaWorld is ending its practice of killer whale breeding following years of controversy over keeping orcas in captivity.

The company announced Thursday morning the breeding program will end immediately. The company also announced a partnership with the Humane Society.

SeaWorld president and CEO Joel Manby said in a statement that the company introduced more than 400 million guests to orcas and is proud of its part in contributing to the human understanding of the whales.

He says the company is “reimagining” how guests will encounter orcas while providing visitors to the theme parks with “experiences that matter.”