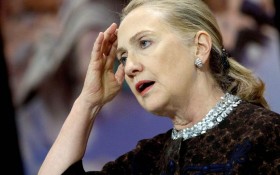 Hillary Clinton’s pursuit of the Democratic party’s presidential nomination was supposed to be a cake walk — but it turned into a dog fight instead.

And, unfortunately for Clinton, it may not be over yet.

While Clinton and her campaign have done everything they can to declare rival Bernie Sanders’ campaign dead, it looks like Sanders has one more trick up his sleeve.

He can force a contested convention and a floor fight at the Democratic National Convention in July.

In a press conference Sunday, Sanders laid out his plan. With a strong enough showing in remaining primary states, he can box Clinton into a situation where she needs the so-called “super delegates” to put her over the top.

Those delegates can switch which candidate they’re supporting right until the last minute, and Sanders and his supporters are already applying pressure to get them to ditch Clinton.

“She will need super delegates to take her over the top of the convention in Philadelphia. In other words, the convention will be a contested contest,” Sanders said during a press conference Sunday.

A contested convention would be a huge embarrassment for Clinton, who has already been dogged by questions about her inability to pull away from Sanders, a 74-year-old admitted socialist.

At the press conference — organized to mark the year anniversary of his insurgent bid — Sanders called on super delegates to reflect the vote in their state. He also cast himself as more electable against Donald Trump, arguing that super delegates should prioritize beating the GOP frontrunner over other concerns.

To win the nomination, Sanders would have to flip hundreds of super delegates, far more than the several dozens that changed from Clinton to support then Illinois Sen. Barack Obama eight years ago.

In the face of at least four potential federal investigations, however, it is not too far fetched to imagine Sanders convincing waves of super delegates to vote against an indicted Clinton. And a contested convention would at least give the Democrats some flexibility in denying Clinton the nomination, if any indictments are handed down.

Sanders supporters have already launched an aggressive lobbying campaign to flip these super delegates — that in some cases included harassing phones calls and online threats.

Despite her lead, Sanders says he plans to compete through the remainder of the primary contests in May and June. The question is whether he’ll have the resources to fund an aggressive advertising campaign, particularly in the expensive media markets of California.

To answer that, Sanders said on Sunday that he brought in about $26 million in April for his campaign.

Sanders’ campaign did not report Sunday how much it spent in April or how much it had in the bank at the end of the month. The figures will be included in fundraising reports filed with the Federal Election Commission later in the month.