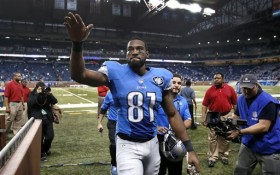 Calvin Johnson, one the most spectacular receivers in NFL history, retired from the Detroit Lions on Tuesday and rekindled memories of the way superstar running back Barry Sanders quietly stepped away from football.

The 30-year-old Johnson called it a career after nine seasons filled with highlight-reel catches, dozens of touchdowns and nearly 12,000 yards receiving. The 6-foot-5 receiver was known as Megatron, a sign of respect for his imposing skills and unusual mixture of speed, power and gracefulness.

“Let me assure you that this was not an easy or hasty decision,” Johnson said. “I, along with those closest to me, have put a lot of time, deliberation and prayer into this decision and I truly am at peace with it.”

Shortly after Detroit finished last season with a 7-9 mark — their seventh losing season in nine years — Johnson announced he was evaluating his future. He had reportedly told some teammates entering last season that it would be his last and told coach Jim Caldwell afterward that he was retiring.

Johnson piled up 731 career receptions for 11,619 yards, a league-record 86.1 yards receiving per game, and 83 touchdowns against defenses often geared to stop him. He reached 10,000 yards (115 games) and 11,000 yards (127 games) yards quicker than anyone in NFL history. Including the postseason, he has another league mark with six 200-yard receiving games.

Johnson broke one of Hall of Famer Jerry Rice’s records with 1,964 yards receiving in 2012. He ranked among league leaders last season with 88 receptions for 1,214 yards and nine TDs, playing through lingering injuries as he often did.

“Not only is he as good as any player I’ve ever seen, but I am convinced that God has not put a finer person on this earth than Calvin Johnson,” Caldwell said.

The three-time All Pro and six-time Pro Bowl receiver leaves Detroit much as Sanders did. The Hall of Famer slipped away from the Lions shortly before the 1999 season after he had 1,491 yards rushing as a 30-year-old running back the previous year, faxing the announcement to a friend at his hometown newspaper.

Like Sanders, the quiet and humble Johnson avoided the spotlight and released a statement of his own.

“While I truly respect the significance of this, those who know me best will understand and not be surprised that I choose not to have a press conference,” Johnson said. “After much prayer, thought and discussion with loved ones, I have made the difficult decision to retire from the Lions and pro football. I have played my last game of football.”

Detroit drafted Johnson out of Georgia Tech with the No. 2 pick in 2007 and gave him a six-year deal worth up to $64 million. Former teammate Roy William gave him his nickname and Johnson gave fans in the Motor City a reason to watch their scuffling team. Like Sanders, his jaw-dropping plays made the Lions bearable.

“He was an amazing and rare talent both on and off the field, and I feel lucky to have been able to see him play,” Sanders said on his website.

Unlike Sanders, Johnson had to endure the NFL’s first 0-16 season in 2008 and he never won a playoff game.

The Lions have now had one of the best running backs and receivers in league history and only one playoff victory to show for it. Sanders helped Detroit beat Dallas in the playoffs on Jan. 5, 1992, the franchise’s only successful day in the postseason since winning the 1957 NFL title.

Johnson, though, refused to ever rant about how the team failed to surround him with enough good players and coaches to win when it mattered most.

He declined last season to say if he would restructure his contract, which called for him to count $24 million against the salary cap next season. In 2012, he signed an eight-year contract through 2019 that could’ve potentially paid him $132 million. The Lions said Tuesday only that “matters were settled to the satisfaction of the parties” one day before free agency opened across the league.

“He was the epitome of dignity, class, humility and excellence,” Lions owner Martha Firestone Ford said.

Johnson faced constant double teams, sometimes drawing two defensive backs pressing him close to the line as if he was lined up wide for a punt team. There were times, though, Johnson couldn’t be stopped. He was fast enough to zip past defensive backs, running a 40-yard dash in 4.4 seconds, and was athletic enough to rise over them with his 45-inch vertical leap.

“We haven’t seen a wide receiver with Calvin’s measurables,” Hall of Fame receiver Cris Carter once said. “The only thing that will stop him from being one of the all-time greats is not staying healthy.”

In the end, health concerns seem to be what shortened his career.

The Lions let him miss some practices in recent years, hoping to cut down on wear and tear, knowing no one worked harder.

“He’s already bigger and stronger than everybody and you’d think he’d take a day off in the weight room, but he works out every day like he’s training for the combine,” former Lions teammate Dominic Raiola said in 2012. “He’s got a LeBron James-type build and you don’t see that much in this league. They don’t make football players that big, ripped up like him with the ability to run fluidly like he does.”

Raiola and Rob Sims, another former offensive lineman for the Lions, will never forget watching Johnson lift and flip huge tractor tires with ease as if they were small enough to fit on a bicycle

“We were like, ‘Man, look at that,'” Sims recalled, several months after seeing the spectacle. “That’ll be a story I’ll tell my grandkids about when they ask me about Calvin Johnson.”

When Johnson was asked to react to what his teammates said about him back then, the soft-spoken native of Tyrone, Georgia, simply shrugged his shoulders and offered one of his many aw-shucks responses.

“I don’t impress myself,” he said.