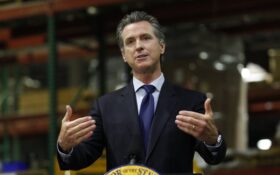 Gov. Gavin Newsom, D-Calif., has made headlines for bashing the governors of red states. He’s urged his residents to avoid Texas, and he’s run television advertisements in Florida. California has banned state officials from dealing with numerous Republican-controlled states.

But now some members of Newsom’s inner circle are doing the opposite.

The Siebel Family Revocable Trust — an entity named for Newsom’s mother-in-law Judith A. Siebel and father-in-law Kenneth F. Siebel Jr. — donated $5,000 to the Friends of Ron DeSantis PAC in April, according to records reviewed by Fox News Digital last month.

In other words, Newsom’s in-laws reportedly donated to the DeSantis campaign ahead of the conservative Florida governor’s bid for reelection in November.

Conservative commentators mocked the California governor after this revelation.

“Thanksgiving is going to be awkward,” SkyNews Australia wrote in a headline.

Both Newsom and DeSantis have stirred speculation about possible runs for president. Newsom visited Washington, D.C., in July, and DeSantis has ranked as the highest-polling Republican in some surveys of New Hampshire.

“I’m sure he’s humiliated because of how aggressive he’s come out against Ron DeSantis,” radio host Clay Travis said on Fox News last month. “There’s a possibility, guys, that this could be a presidential election in 2024 or 2028. These guys don’t like each other.”

The Siebel family has reportedly donated to Republicans in the past. According to FEC filings reviewed by Fox News Digital, Kenneth Siebel Jr. has donated money to campaigns for GOP Sens. Tom Cotton of Arkansas, Josh Hawley of Missouri and Ron Johnson of Wisconsin.

Newsom has counted several other Republicans as members of his family, even revelation about his in-laws. In the 2000s, Newsom was married to Kimberly Guilfoyle, a onetime adviser to former President Donald Trump and the current fiancee of Donald Trump Jr.

Newsom, DeSantis and the Siebel family have all remained silent on this new report.

Both governors are headed toward reelection on Nov. 8… only a few weeks before a tense Thanksgiving at the Newsom household.