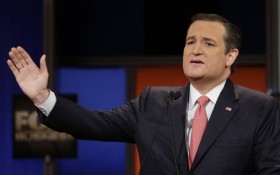 When Ted Cruz sneered at what he called Donald Trump’s “New York values,” some New Yorkers took it very personally. And in some cases, they responded about the way you’d expect New Yorkers to react.

The ever-combative Daily News hit the streets with a big front-page illustration of the Statue of Liberty giving Cruz the finger. The headline: “DROP DEAD, TED.” And in a reference to the Texas senator’s birthplace, the tabloid added: “You don’t like N.Y. values? Go back to Canada!”

On the morning after Thursday night’s Republican presidential debate, New York Gov. Andrew Cuomo took to the airwaves to denounce the candidate and demand an apology for comments he called “obnoxious on every level.”

The use of “New York values” as a term of abuse rankled plenty of city residents.

“Like that’s a bad thing?” said Willie Perry, a real estate salesman and registered Republican, as he headed to work in New York City. “Actually it’s a good thing. I think that’s ludicrous. What did he mean by that?”

John Markowski, a minister who was dropping his son off at a public school, said: “It’s insulting for anyone to make a derogatory comment about New York values. I think we pride ourselves on being a place of diversity and equality.”

During the debate, moderator Maria Bartiromo asked Cruz to explain past comments he had made about Trump embodying “New York values.”

“You know, I think most people know exactly what New York values are,” Cruz said.

So the GOP conservative explained: “Listen, there are many, many wonderful, wonderful working men and women in the state of New York. But everyone understands that the values in New York City are socially liberal or pro-abortion or pro-gay-marriage, focus around money and the media.”

Trump responded by defending his home city as being filled with “loving people, wonderful people.” And he cited the city’s response to the 9/11 attacks.

One in 38 Americans lives in New York City, but the state’s record of going for the Democrat in the winner-take-all electoral college system means that Republicans rarely have to worry about insulting the populace. Bashing the big city has long been a winning strategy in more conservative parts of the country, namely the Midwest and the South.

Not a lot of New Yorkers have given money to Cruz’s bid for the White House. His campaign took in only about $487,000 from New York contributors through Sept. 30, according to the most recent filings. But one New Yorker, Wall Street hedge fund mogul Robert Mercer, contributed $11 million last April to a super PAC that supports Cruz.