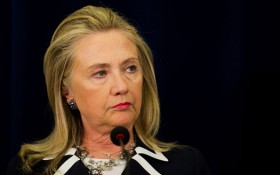 Shocking new poll results released today from Quinnipiac University could turn the race for the Democratic presidential nomination upside down. And if the numbers hold, Hillary Clinton may have a nearly impossible path to the White House.

According to the poll, Clinton has for the first time actually fallen behind upstart Vermont Senator Bernie Sanders in Iowa, by a slim margin of 41% to 40%. Clinton also trails Sanders in New Hampshire.

The problem? Most campaigns are as good as dead if they lose both of these early states.

In the modern presidential era, only one candidate went on to become president after being defeated in both states. Ironically, it was Bill Clinton — but he (like most other candidates) essentially forfeited Iowa, where former Iowa Senator Tom Harkin was certain to win.

It seems Clinton is willing to try anything to help reverse her sagging poll numbers. According to the Associated Press, in a speech on Wednesday the Democratic presidential candidate positioned herself against her one-time ally, President Obama, and tried to portray herself as the hawkish alternative to his presidency — starting with Iran.

Clinton lined her praise of the Iran deal with skepticism about the intentions and trustworthiness of the longtime U.S. enemy.

While none of Clinton’s views are new, her assertive remarks are nonetheless notable shift in a campaign in which there is little daylight between her and Obama on most issues.

The strategy won’t be easy, and many see it as a desperate last move. Clinton wants to take credit for all foreign policy victories of the Obama administration — she was, after all, the nation’s top diplomat during Obama’s first four years in office. At the same time, she’s trying to insulate herself against Obama’s critics by casting herself as more assertive than the president she served.

According to polls, voters aren’t buying it.

As would be expected, Republicans aren’t willing to give Clinton any quarter as they frequently cast the Iran deal as a plank of an “Obama-Clinton foreign policy.” As secretary of state, she sent a top adviser to participate in secret meetings with Iran that started the international negotiations that led to the agreement.

“Hillary Clinton’s central role in crafting this dangerous agreement is one of the many examples of her failed record as secretary of state,” said Republican National Committee Chairman Reince Priebus in a statement. “Voters will have no choice but to hold Hillary Clinton accountable at the ballot box next year.”