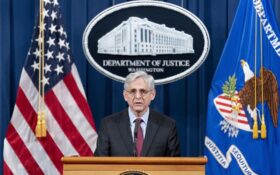 The FBI raided the estate of former President Donald Trump only a week ago, and yet the raid has already become the subject of extensive polling.

According to some previous polls, Trump’s base was energized by the raid and the public at large voiced polarized opinions on it.

Now, a new poll found results consistent with these previous polls… but also picks up a worrying new concern about the U.S. beginning to resemble a Third World nation.

55 percent of polled voters told Rasmussen Reporters that this FBI raid would happen in Third World countries — a landslide majority.

And one demographic the Democrats can’t afford to lose is especially concerned: Young voters.

In other words, Trump may elicit some sympathy from young people, a demographic previously hostile to him.

A majority of voters in each demographic described the raid as a third-world ploy… every demographic except Democrat voters.

Only 38 percent of Democrats shared this Third World concern.

Voters who agree that the Trump raid is what happens in 3rd world countries:

In an earlier poll, 83.3 percent of Republican voters and 71.7 percent of independent voters told Trafalgar that the FBI search had increased their motivation to vote in the 2022 election. In another poll, 49 percent of registered voters told Politico that they approved of the raid.

The Horn News reported on these polls at the time.

Some liberals, despite their negative opinions of Trump, have argued that Biden can pardon him to restore national unity.

Of course, Biden can only stop federal charges, not the New York charges. The Trump Organization is facing intense scrutiny from New York prosecutors at the moment.

As soon as Thursday, Trump’s longtime finance chief is expected to plead guilty in a tax evasion case that is the only criminal prosecution to arise from a long-running investigation into the former president’s company, three people familiar with the matter told The Associated Press.

Trump Organization CFO Allen Weisselberg was scheduled to be tried in October on allegations he took more than $1.7 million in off-the-books compensation from the company, including rent, car payments, and school tuition.

Prosecutors in the Manhattan district attorney’s office and Weisselberg’s lawyers met Monday with the judge overseeing the case, Juan Manuel Merchan, according to court records. The judge then scheduled a hearing in the matter for 9 a.m. Thursday but did not specify the reason.

The people who spoke to the AP did so on condition of anonymity because they were not authorized to speak publicly about the case. They said the purpose of Thursday’s hearing was for Weisselberg to enter a guilty plea, but cautioned that plea deals sometimes fall apart before they are finalized in court.

Weisselberg’s lawyer, Nicholas Gravante Jr., told The New York Times on Monday that Weisselberg has been engaged in plea negotiations to resolve the case, but did not specify terms of a potential plea deal. Reached by the AP, Gravante declined to comment.

The Times, citing two people with knowledge of the matter, said Weisselberg was expected to receive a five-month jail sentence, which would make him eligible for release after about 100 days. The deal would not require Weisselberg to testify or cooperate in any way with an ongoing criminal investigation into Trump’s business practices.

News of Weisselberg’s plea negotiations came days after the judge denied requests by his lawyers and the Trump Organization to throw out the case. The judge did drop one criminal tax fraud count against the company citing the statute of limitations, but more than a dozen other counts remain.

In seeking dismissal of the case, Weisselberg’s lawyers argued prosecutors in the Democrat-led district attorney’s office were punishing him because he wouldn’t offer up damaging information against the former president.

The judge rejected that argument, saying that evidence presented to the grand jury was legally sufficient to support the charges.

Weisselberg, who turned 75 on Monday, is the only Trump executive charged in the yearslong criminal investigation started by former Manhattan District Attorney Cyrus Vance Jr., who went to the Supreme Court to secure Trump’s tax records. Vance’s successor, Alvin Bragg, is now overseeing the investigation. Several other Trump executives have been granted immunity to testify before a grand jury in the case.

Prosecutors alleged that Weisselberg and the Trump Organization schemed to give off-the-books compensation to senior executives, including Weisselberg, for 15 years. Weisselberg alone was accused of defrauding the federal government, state and city out of more than $900,000 in unpaid taxes and undeserved tax refunds.

The most serious charge against Weisselberg, grand larceny, carried a potential penalty of five to 15 years in prison. The tax fraud charges against the company are punishable by a fine of double the amount of unpaid taxes, or $250,000, whichever is larger.

Trump has not been charged in the criminal probe, but prosecutors have noted that he signed some of the checks at the center of the case. Trump, who has decried the New York investigations as a “political witch hunt,” has said his company’s actions were standard practice in the real estate business and in no way a crime.

In the months after Weisselberg’s arrest, the criminal probe appeared to be progressing toward a possible criminal indictment of Trump himself, but the investigation slowed, a grand jury was disbanded and a top prosecutor left after Bragg took office in January — although he insists it is continuing.