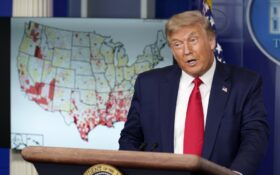 Now the first poll has gauged the response of voters… and it’s bad news for the Democratic Party.

Republicans and Independent voters, as well as a sizeable chunk of Democratic loyalists, don’t believe the FBI acted as impartially.

And to no great surprise, the search inside Trump’s Mar-a-Lago estate has also fired up these voters to demand change in the 2022 midterm.

According to Trafalgar polling, 76.7 percent of Republicans, 53.9 percent of Independents, and even 11.9 percent of Democratic voters said that Trump’s political enemies were behind the FBI raid on Trump’s private residence.

70.5 percent of Democrats said an impartial justice system was behind the FBI raid. Only 35.3 percent of Independents — a critical voting bloc that sways elections — agreed.

83.3 percent of Republican voters and 71.7 percent of Independent voters said the FBI search has increased their motivation to vote in the 2022 election, where experts predict a “red wave” will sweep control of Congress away from President Joe Bien and his political allies.

Only 55.2 percent of Democrats said the same, according to Trafalgar.

That spells bad news for Democrats, who will need to win over Independents to maintain control in 2022… and beyond.

But don’t take our word for it. What are your thoughts?

Do you agree that Trump’s political enemies were behind the stunning FBI raid of Mar-a-Lago?

Or was the FBI acting as an independent and impartial system of justice?

Who is behind the FBI raid of Trump's residence?