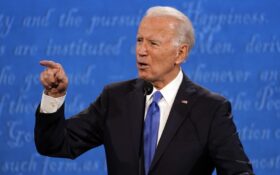 President Joe Biden has aggressively gone after former President Donald Trump’s legacy in just a few months: the military, energy independence, and public faith in our nation’s election integrity have all deteriorated.

But people of all parties agree the U.S. still has the world’s greatest intelligence and spying operation—and Biden may be using it on you.

Republicans who oversee U.S. intelligence agencies say that Biden or his underlings have crossed the line and possibly violated the law against spying on U.S. citizens.

As you probably gathered from the title, it plays up the threat posed by “domestic violent extremists (DVEs)” whose ideas are “derived from anti-government or anti-authority sentiment.” So, if you’re against the Biden administration, you’re already a potential terrorist suspect. Then the report names the four groups it considers most likely to commit acts of domestic terrorism:

But that wasn’t what caught its readers’ attention; two other items did.

First, several times the report says it is an Intelligence Community (IC) “assessment” and uses phrases like, “The IC assesses…..”

Second—and more importantly—was the fact that the report is about American terrorists who act “without direction or inspiration from a foreign terrorist group or other foreign power.”

Critics asked: Does that mean the U.S. government is using intelligence officers to spy on its own citizens?

All 10 GOP members of the House Intelligence Committee signed a letter to Haines warning that her office seems to have broken the law.

The report says it was “prepared under the auspices of the DNI” and “drafted” by members of the National Counter-Terrorism Center (NCTC), which is supposed to watch foreign terrorists like ISIS.

The authors add the report, about American citizens, included “contributions from the Central Intelligence Agency (CIA).”

U.S. law, including the budget that funds the DNI, “does not include authorization for activities related purely to domestic terrorism when such activities have no links to foreign governments, persons, or organizations,” House Republicans wrote.

The congressmen, led by Rep. Devin Nunes of California, said, “we are concerned that IC elements and personnel acted beyond their legal authority in its production.”

“Are there Executive Branch policies which you believe empower your office or any element of the IC to conduct analysis of domestic threats not involving foreign actors?” they asked.

The House Republicans seemed to give Haines an out, writing that the report was sloppily written and made claims that didn’t really come from the intelligence community at all.

“We find this to be misleading and urge you to clarify which elements in the IC concurred with this” domestic terrorism report “and the intelligence basis, if any, for that concurrence.” Haines could save face by saying that the U.S. spy machine had followed the law—but that would also mean deflating the threat posed by “DVEs.”

That seems to be the whole point of the report—to keep readers fixated on “domestic terrorists,” “insurrectionists,” and…anyone or anything except how the Deep State is searching for everyday Americans’ private information in federal databases.

But if the Biden administration has already sicced its spy agencies on Biden’s political enemies, that’s against the law—and someone should have to pay.

“Involvement of the intelligence community in the domestic activities of U.S. citizens is one of the most dangerous breaches of civil liberties and democratic order the U.S. Government can perpetrate,” wrote left-wing, civil libertarian journalist Glenn Greenwald, who first broke the story last week. “The evidence of growing incursions by the intelligence community in U.S. domestic politics is already strong and ample, and further incursions would be both dangerous and illegal.”

If the Biden administration is worried about Americans breaking the law, it should start with its own intelligence officers—and, if guilty, heads should roll.