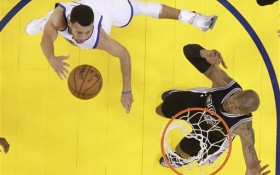 Stephen Curry and the Golden State Warriors reached a milestone that only Michael Jordan’s Chicago Bulls have achieved in the history of the NBA.

All that’s left for Golden State to do now is win three more games and become the winningest team of them all.

Curry scored 27 points and the Warriors became the second team to win 70 games in a season by beating the San Antonio Spurs 112-101 on Thursday night, wrapping up home-court advantage throughout the playoffs.

“Two teams in the history of this game have reached where are right now,” Curry said. “It’s a proud moment and something that should be recognized.”

The Warriors (70-9) bounced back from their second loss in three home games two nights earlier against Minnesota and joined the 1995-96 Bulls as the only teams in the 70-win club. Golden State can pass the Bulls by sweeping the final three games, including a rematch in San Antonio on Sunday.

Coach Steve Kerr, who played on the record-setting Bulls team, acknowledges being uneasy about chasing the record instead of giving the team a break, but the Warriors’ young stars are gung-ho to get it.

“Most of the guys in the locker room are saying, ‘We’re right here, we’ve put all this effort into it, let’s go for it,'” forward Draymond Green said.

Harrison Barnes scored 21 points and Green added 18 to help the Warriors avoid losing back-to-back games for the first time this season. Golden State has outscored the opposition by 14.6 points per game following its nine losses and has finally achieved its main goal in the regular season of earning the top seed in the playoffs.

“It took 70 wins to wrap up the one seed, which tells you all you need to know about that team in the other locker room,” Kerr said.

Kawhi Leonard scored 23 points for the Spurs, who will enter the playoffs next weekend as the second seed in the West.

San Antonio has been outscored by 41 points in two losses at Golden State this season and will have to open on the road if these teams meet again in the conference finals.

“You can’t make mistakes against these guys,” coach Gregg Popovich said. “Best team on the planet. If you lose your concentration defensively or you shoot ill-advised shots or don’t move the ball and give it back to them quickly, you’re in big trouble.”

After a relatively quiet first half, Curry took the game over in the third quarter and sent the Warriors to their second easy win at home against the Spurs this season. Curry had 15 points and four assists in the quarter as he was able to drive to the basket with ease for either his own shot or to set up a teammate.

The Warriors shot 80 percent in the third alone and took an 87-69 lead into the fourth — easily passing the 79 points they scored the entire game in last month’s loss at San Antonio.

This was a highly anticipated showdown between the league’s top two teams, with the 134 combined wins the most ever in a regular-season matchup. Both took the game seriously, with Popovich opting to play his stars instead of resting them. Popovich even called a timeout less than a minute into the game after a defensive breakdown led to an open 3-pointer for Klay Thompson.

Not to be outdone, Kerr got angry after a turnover led to an open 3-pointer for Danny Green late in the first half and slammed his white board so hard during the timeout that his marker flew into the air.

That 3 by Green helped the Spurs cut a 15-point deficit down to six in the final minute of the half. But Barnes answered with a pair of two 3-pointers to give the Warriors a 52-40 lead at the break.

Warriors: Green committed two fouls in the first 3:53 and then got called for a technical for arguing the second call before going to the bench early. … Barnes has scored in double figures in a career-high nine straight games.

Spurs forward LaMarcus Aldridge left the game late in the first quarter with a dislocated right pinky finger. Trainers taped it to his ring finger and he returned in the second quarter.

“It freaked me out,” he said. “I had never had it happen to me before. I looked down and it was going the other direction. It definitely caught me off guard. They popped it in, I went back in real quick, and as soon as I touched the ball it went right back out. It didn’t feel right the whole night.”