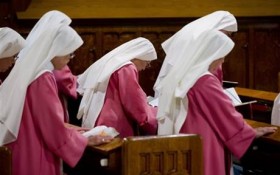 State police say a 78-year-old nun was caught shoplifting $23 worth of coffee, snacks and toiletries from a central Pennsylvania store.

Troopers say Sister Agnes Pennino was seen taking the items from the Surplus Outlet near Berwick on Monday afternoon.

WNEP-TV reports police determined the woman captured on surveillance video was the nun who lived about 20 miles away at a convent in Danville.

The station says Saints Cyril and Methodius Convent officials declined to comment. Nobody answered the phone at the convent Thursday morning.

Shoplifting is a summary offense, akin to a traffic ticket, meaning the nun will likely pay a fine if she’s convicted.

Store manager Zane Kishbach says he “couldn’t believe it that a nun would actually do something like that.”