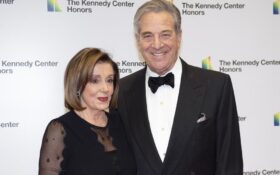 Rep. Nancy Pelosi, D-Calif., and her husband Paul have amassed a massive fortune since the former Speaker of the House took office in 1987.

The Pelosis are worth between an estimated $115-120 million, and potentially as much as $171 million… an impressive feat considering Nancy Pelosi earned just $223,000 annually for her duties as House speaker.

That could all change should Sen. Josh Hawley, R-Mo., and his “Preventing Elected Leaders from Owning Securities and Investments Act” pass.

It would bar members of Congress and their spouses from holding stock options and would require current members to divest their holdings… which would mean the Pelosi family would be forced to sell and Paul could no longer profit from stock trades.

“Members of Congress and their spouses shouldn’t be using their position to get rich on the stock market – today l’m introducing legislation to BAN stock trading & ownership by members of Congress. I call it the PELOSI Act,” Hawley wrote Tuesday on Twitter.

“For too long, politicians in Washington have taken advantage of the economic system they write the rules for, turning profits for themselves at the expense of the American people,” Hawley said in a statement. “As members of Congress, both Senators and Representatives are tasked with providing oversight of the same companies they invest in, yet they continually buy and sell stocks, outperforming the market time and again.”

“While Wall Street and Big Tech work hand-in-hand with elected officials to enrich each other, hardworking Americans pay the price,” his statement said.

“The solution is clear: we must immediately and permanently ban all members of Congress from trading stocks.”

Pelosi and other members of Congress have been criticized for years for making a fortune on extremely timely trades, and have been frequently accused of using insider knowledge to get huge profits.

Despite 2022 being the worst market since 2008, both Democrats & Republicans beat the market.

Many politicians individually beat the market.

And many made unusual trades resulting in huge gains.

At the time he wrote the following letter —

I write to request that, as Chairman of the Senate Homeland Security and Governmental Affairs Committee (HSGAC), you convene a hearing as soon as practicable to consider bipartisan, bicameral solutions to banning insider stock trading by Members of Congress and their spouses.

This issue of whether and how Members of Congress engage in various financial transactions deserves scrutiny by the Committee. For example, recent reports show that Speaker Pelosi’s family continues to engage in what is arguably inappropriate stock trading activities. According to reports, her husband Paul Pelosi recently purchased 20,000 shares of Nvidia, a multinational semiconductor company, worth between $1 million and $5 million. This trade came ahead of a likely vote in the Senate that could set aside $52 billion to boost domestic semiconductor manufacturing and give tax credits for production.

This specific trade raises serious questions, but it’s nothing new. Last year, Speaker Pelosi’s biggest financial gains came from her husband exercising options to purchase shares of Google just one week before the House Judiciary Committee held a hearing on antitrust legislation that would impact Big Tech companies. In 2020, Speaker Pelosi and her husband outperformed the S&P 500 by a whopping 14.3 percent.

It has been more than six months since members of this Committee proposed measures to put an end to inappropriate financial transactions. Despite these efforts, Speaker Pelosi and her husband remain undeterred from cashing in. More than 70% of Americans agree that this is unacceptable and that Congress shouldn’t be trading stocks at all. After all, clean government in Washington begins with Members of Congress putting the American people first—and not lining their own pockets.

I appreciate your willingness to discuss this issue with me previously. I believe the time has come for the Committee to hold an oversight hearing focusing specifically on banning Members of Congress and their spouses from trading stocks. Let’s get this done.