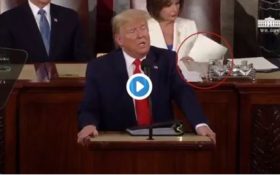 According to House Speaker Nancy Pelosi’s office, her decision to rip in half President Donald Trump’s State of the Union address was “an unplanned show of disgust.”

Pelosi said the State of the Union address was “a manifesto of mistruths” as she left the Capitol building. Her office said that in her spontaneous rage, she couldn’t help but tear the president’s address to pieces.

Photo and video evidence shows otherwise, critics have pointed out.

The footage will be hard for Pelosi’s camp to deny. Video from Trump’s address — taken 35 minutes before Pelosi rips the pages — clearly shows the House Speaker’s decision to tear apart the State of the Union address was a “pre-meditated” political stunt.

10:24 PM: Pelosi holds up the already torn paper and finishes ripping it in half. pic.twitter.com/IR2y9CeYVo

Here's Pelosi testing to see if she could rip the speech before the speech even started. She was planning to do it from the start. pic.twitter.com/1gEMlYrNB7

Pelosi’s act of protest was met with harsh criticism by Republicans.

“She might as well rip up any plans for attracting independent voters,” said Trump campaign spokesman Tim Murtaugh said in a statement. “Pelosi and the Democrats sat on their hands through all of the good news for Americans in that speech.”

In a statement, Gaetz complained that Pelosi’s stunt wasn’t just in bad taste.

He said Pelosi broke the law, and filed an ethics complaint against her with Congress for destroying official government records.

BREAKING: I'm filing an ethics complaint against @SpeakerPelosi for destroying @realDonaldTrump's State of the Union speech.

Her conduct was beneath the dignity of the House, and a potential violation of law (18 USC 2071).

Nobody is above the law. She must be held accountable. pic.twitter.com/dXPPWQNtI8

The president has been on a roll this week, with his impeachment acquittal secured, his job approval numbers ticking upward, and Wall Street looking strong.

During his State of the Union address, Trump struck a largely optimistic tone and celebrated the “Great American Comeback” on his watch

“America’s enemies are on the run, America’s fortunes are on the rise and America’s future is blazing bright,” Trump declared. “In just three short years, we have shattered the mentality of American decline and we have rejected the downsizing of America’s destiny. We are moving forward at a pace that was unimaginable just a short time ago, and we are never going back.”

Holding out the nation’s economic success as the chief rationale for a second term, Trump’s speech provided something for every section of his political base.

Trump never mentioned his impeachment in his 78-minute speech. That followed the lead of former President Bill Clinton, who did not reference his recent impeachment when he delivered his State of the Union in 1999. Trump spoke from the House chamber, on the opposite side of the Capitol from where the Senate one day later acquitted him largely along party lines.

Trump spent much of the speech highlighting the economy’s strength, including low unemployment, stressing how it has helped blue-collar workers and the middle class, though the period of growth began under his predecessor, Barack Obama.

Trump stressed the new trade agreements he has negotiated, including his phase-one deal with China and the United States-Mexico-Canada agreement he signed last month.

The White House said the president was offering a message of unity, but there were moments he spent time on issues that have caused division and resonated with his political base. He attacked Democrats’ health care proposals for being too intrusive and again highlighted his signature issue — illegal immigration — trumpeting the miles of border wall that have been constructed.

He also dedicated a section to “American values,” discussing efforts to protect “religious liberties” and limit access to abortion as he continues to court the evangelical and conservative Christian voters who form a crucial part of his base.