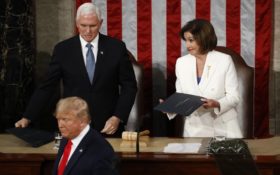 House Speaker Nancy Pelosi’s unprecedented move to rip apart President Donald Trump’s State of the Union speech has been widely criticized from both sides of the political aisle.

The move surprised even Democratic voters, and on Wednesday one of the country’s top legal scholars called for Pelosi’s immediate resignation.

Professor Jonathan Turley, the chair of Public Interest Law at George Washington University Law School and one of the leading constitutional scholars in the United States, called Pelosi’s behavior that of a “partisan troll” that has no place in the House of Representatives.

“The House has its share of infamies, great and small, real and symbolic, and has been the scene of personal infamies from brawls to canings. But the conduct of Speaker Nancy Pelosi at the State of the Union address this week will go down as a day of infamy for the chamber as an institution,” Turley wrote. “It has long been a tradition for House speakers to remain stoic and neutral in listening to the address.”

Turley said Pelosi conducted herself poorly throughout the State of the Union by “mocking” the president “behind his back with sophomoric facial grimaces and head shaking, culminating in her ripping up a copy of his address.”

“While many will celebrate her trolling of the president, she tore up something far more important than a speech,” Turley wrote in his opinion piece for The Hill. “Pelosi has shredded decades of tradition, decorum, and civility that the nation could use now more than ever.”

“The House speaker is more than a political partisan, particularly when carrying out functions such as the State of the Union address. A president appears in the House as a guest of both chambers of Congress,” he said. “The House speaker represents not her party or herself but the entirety of the chamber. At that moment, she must transcend her own political ambitions and loyalties.”

“If Pelosi cannot maintain the dignity and neutrality of her office at the State of the Union, she should resign as the speaker of the House of Representatives,” Turley wrote.

On social media, the political stunt was heavily divisive.

Conservative activist Charlie Kirk pointed out that ripping up an official copy of the State of the Union could be considered a criminal offense punishable by “up to three years in prison.”

US Code prohibits the destruction of government records

Nancy Pelosi may have just committed a violation of 18 U.S.C. § 2071, Section 2071 (a) when she ripped up President Trump’s State of the Union address

This violation is punishable by up to three years in prison

“I wasn’t sure if she was ripping up the speech, or ripping up the constitution,” Pence told Fox News on Wednesday. “The contrast here is a president that spend an hour and a half talking about America, and Nancy Pelosi — in the final moments — tried to make it about her. I think the American people see through it, though.”

White House advisor Kellyanne Conway said Pelosi’s political stunt was “petty and peevish” and called for the Speaker to be censured.

Conway’s call for Pelosi to be censured was joined by a former Speaker of the House, Newt Gingrich, who wrote —

As Speaker of the House for four State of the Unions by a President of the other party I am disgusted and insulted by the viciously partisan action of Nancy Pelosi tearing up the speech.She isn’t clever or cute her childishness insults our American traditions -should be censured.

Should Congress censure Nancy Pelosi for her actions?