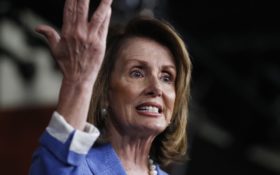 At the same time as her fellow Democrats were touting the benefits of a bipartisan budget deal, House Minority Whip Nancy Pelosi began filibustering it.

After years of open speculation about Pelosi’s mental well being, has the California lawmaker finally lost it?

Indeed, the bizarre, schizophrenic-like public break with her party — and all other lawmakers — left observers scratching their heads, wondering what Pelosi was doing.

Technically the House can’t filibuster — but as Whip, Pelosi has the ability to command the floor. So she’s launched a one-person filibuster to demand something that’s already on planned…

Has she lost touch with reality?

Pelosi took to the House floor, promising to speak for hours, and said she would oppose that almost-completed budget pact even though it would boost funding for many domestic priorities favored by Democrats.

She declared the agreement “does not have my support, nor does it have the support of a large number of members of our caucus.”

That same caucus on Tuesday had already seen legislation pass to keep the government running through March 23, marrying a stopgap spending measure with a $659 billion Pentagon spending plan.

Pelosi’s sudden outburst and filibuster has left outside observers surprised and perplexed.

While Pelosi held up the House, the rest of her party leadership praised the budget deal.

In remarks on the Senate floor, Schumer focused on the new agreement as a rare moment of bipartisanship and cooperation. He called it “the best thing we’ve done” for the middle class and the economy.

“We have reached the budget deal that neither side loves but both sides can be proud of,” Schumer said.