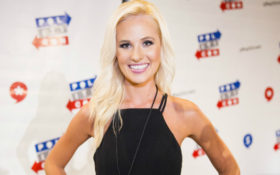 Last week, The Horn reported on a Democratic lawmaker from Connecticut that has been under fire for taking a knee during the Pledge of Allegiance.

She claimed her protest was a so-called “resistance” to President Donald Trump, and Fox News star Tomi Lahren does not believe she has a right to disrespect the flag, or our veterans.

Lahren explained that “Just because she has the right, it doesn’t make her right,” and that this is just another sign that Democrats put their hate for Trump above their love for America.

The unhinged Democrat, Melissa Schalg, has angered several veterans for her disrespectful act because they believe it does not affect Trump, but rather is a protest against them.

Lahren took aim at Schlag and feels that the lawmaker deserves to be called out for her actions.

“We have so many Americans who have fought and died for this country. And it just shows that there are some, usually on the Democratic side of the aisle, that their disdain for this president is greater than their love for this country,” Lahren explained.

Schlag taking a knee during the Pledge of Allegiance is proof that Democrats do not care who they offend, they want their hatred for the president to be known.

Patriotism has become a thing of the past for the Democratic party.

And as noted by Lahren, Americans may not like the president, but there is no need to take that disdain out on the flag or our veterans.

If this woman hates her president, her country, and the U.S. flag so much, why does she want to hold office?

“Even the people that claim to hate this country refuse to leave it, so it must be a pretty great one, right?” Lahren asked.

We could not agree more, Lahren. God bless America!