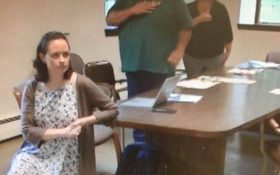 A Democratic lawmaker from Connecticut has come under fire after taking a knee during the Pledge of Allegiance at a July 16 Board of Selectman meeting.

Her protest was supposedly motivated by the so-called “resistance” to President Donald Trump.

The unhinged Democrat, Melissa Schlag, had received backlash from her small town. Many Republican voters say her protest was very disrespectful to the American flag. Schlag said she enjoyed the power of the moment.

“I felt nervous when I did it, but I also felt powerful,” Schlag told The Hartford Courant. “If I don’t speak up, those who can’t won’t be heard.”

Schlag says her protest had nothing to do with disrespecting our country, our servicemen and woman, or our flag.

“The Pledge of Allegiance doesn’t have anything to do with the flag, in my opinion,” Schlag told FOX61.

“One of the things the flag stands for — it stands for our freedom, it stands for our democracy. It stands for the fundamental ideal that we can have differences of opinion, but we all stand in respect of our flag because many people, including my 93-year-old grandfather who’s a veteran, fought in defense of the very liberty that the flag resembles.”

Melissa Schlag must resign immediately! It should be the basic responsiblity of any public official to respect the Flag. Haddam and Connecticut deserve better leadership! #DontSchlagTheFlag #ctgop #ctgov #ctpolitics pic.twitter.com/wbpIYzZcYN

Melissa Schlag – resign and get the fk out of my country immediately you worthless POS. You're a disgusting apologist that needs to leave immediately – fking freak simpleton.

#MelissaSchlag you're a Disrespectful DISGRACE

Melissa Schlag said “The Pledge of Allegiance doesn’t have anything to do with the flag, in my opinion”…does she not know the words? It literally starts off , I pledge allegiance to the flag! You’re entitled to your opinion but your opinion is wrong.

According to Fox News, this was not Schlag’s first flag protest.

During her time as first selectwomen in 2013 to 2015, she had the United States flag and the Connecticut flag removed from her office. She lost her reelection in 2015, but won her seat again in 2017.