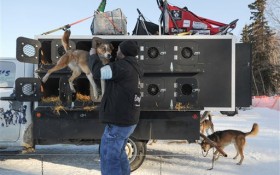 Eighty-five mushers set off Sunday to conquer the toughest terrain this nation has to offer, vying to become the first to reach Alaska’s western coast with their dog teams.

Scott Janssen, an undertaker from Anchorage who is known as the Mushing Mortician, was the first to leave across Willow Lake in the staggered started to the Iditarod Trail Sled Dog Race.

Dallas Seavey was only wearing a long-sleeved shirt as he packed his sled under blue skies and warm temperatures. He said it felt just like another day for him and his dogs, doing their thing.

That could be bad news for the field as Seavey has won three out of the last four races.

“If we have a good race, we should have a good finish. If we can maximize this team, we’ll get there fast,” he said of the dash for the finish line under the burled arch in Nome. The winner is expected in about nine days after traveling over two mountain ranges, the Yukon River and battling the fierce winds along the Bering Sea coast.

Besides Seavey, there are six other former champions in the race, including four-time winner Lance Mackey.

Last year, Mackey struggled to finish the race. The cancer survivor also has a condition which affects blood circulation in his hands, and he had problems caring for his dogs last year. His brother, musher Jason Mackey, helped with dog care so Lance could finish the race.

When asked Sunday if his hands were good, Lance Mackey said, “Well, to a degree.”

He has had continued treatment on his hands, including a surgery last month that took out a nail bed on one finger. He said the pain level has been reduced a bit, and he was ready to get the race started.

“If we don’t have a good run this year, it’s not the dogs’ fault. This team, in my opinion, and I know what kind of dogs it takes, this team has what it takes. It’s up to me now to show the world, and they deserve it,” he said.

Also in this year’s race is two-time champion Robert Sorlie of Oslo. He leads a large Norwegian contingency among the mushers. But Mats Pettersson will tell you there are eight Norwegians in the race, and not nine.

“I feel a little bit lonely,” he said because everyone believes he’s Norwegian, too. “I have to tell every guy I’m Swedish.”

Adding to the international flair of the race is Kim Franklin, a 49-year-old musher from Herts, England.

This is her second race to Nome, but she’s still considered a rookie after being withdrawn at the Rohn checkpoint in 2008. She had to qualify for the Iditarod last winter.

The winner is expected in the old Gold Rush town of Nome in about nine days.