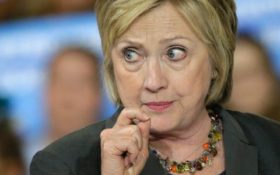 There’s been a major twist in the death of Peter Smith, a top GOP operative and former lead investigator into the illegal email server of former Secretary of State Hillary Clinton.

According to authorities, Smith committed suicide in May, 2017 under what police called “unusual circumstances.”

The Horn News reported in July 2017 that, “Smith had been working to obtain Clinton’s emails since September 2016, and told The Wall Street Journal that he had found five groups of hackers, two being Russian, that claimed they had the emails.”

“He had assembled an elaborate team of researchers, investigators, computer experts and attorneys in order to obtain the emails Clinton hastily deleted before handing her email server over to the FBI.”

Eight months later, just as Smith seemed to have everything in place, he died. Originally, officials claimed he passed away of natural causes inside his hotel room.

Hotel room staff, however, reportedly found Smith dead with a bag over his head. Some time later, officials quietly changed Smith’s official cause of death to suicide by asphyxiation.

Rumors started flying immediately that Smith’s death was linked to his investigation of the Clinton emails.

Now, Congressional investigators have reportedly started to question Smith’s associates about his work… and that presumably includes the circumstances surrounding his death.

The Gateway Pundit, a conservative news outlet with connections to the White House, claimed Thursday: “Our sources say there is much more to this story.”

What that additional information is remains a mystery. But behind the scenes, investigators are working to find the truth.