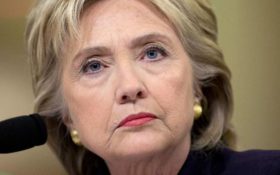 Ever since Rich was gunned down on July 10, 2016 rumors have swirled that he was a victim of the Clinton family’s unscrupulous lust for power.

One person has recently come forward to add weight to the rumors — and it has blindsided the Democratic Party.

Brazile is a very powerful and well connected person. Even so, she says she was scared after the unexplained murder of Rich last year.

So scared, in fact, that she hid inside and refused to open her blinds in case snipers were coming for her.

That’s according to Matt Drudge, owner of the conservative news website The Drudge Report, who read Brazile’s startling confession in an advanced copy of her forthcoming tell-all book.

Brazile writes she was haunted by murder of DNC Seth Rich, and feared for her own life, shutting the blinds so snipers could not see her ????

Indeed, Rich’s death was so bizarre, rumors began almost immediately that his murder was to protect a Clinton conspiracy. Critics point to strange details that seem to indicate the shooting wasn’t a robbery — for example, none of Rich’s personal belongings were stolen.

Rather than a botched robbery, critics say Rich’s murder was ordered as political revenge.

Some conservatives, including Fox News’ Sean Hannity, have openly speculated that Rich was murdered because he was the source leaking Clinton’s emails to WikiLeaks founder Julian Assange.

The rumors heated up in May when a private investigator for the Rich family said he’d discovered evidence that was being covered up.

“My investigation shows someone within the D.C. government, Democratic National Committee, or Clinton team is blocking the murder investigation from going forward,” former homicide detective Rod Wheeler told Fox News in May.

It’s an accusation the Rich family and the Clinton campaign have both venomously denied.

In fact, Fox News was forced to retract the story days later when Wheeler’s credibility was called into question.

However, the former chair of the DNC being so haunted by the murder she feared for her own life?

Does that sound like a simple botched robbery on the streets of Washington, D.C.?

While not proof enough to send Hillary and her team away to jail, Brazile’s startling confession will certainly add fuel to the rumor mill.

And it may encourage others to come forward, as well.